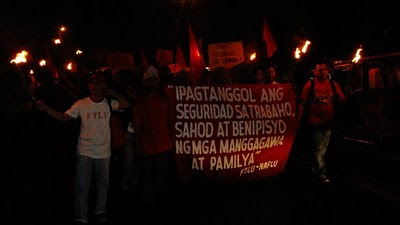 The workers of Fortune Tobacco Corporation (FTC) are opposing management’s plans to retrench some 2,000 workers before possible rehiring as new employees of the merged company Philip Morris Fortune Tobacco Corporation (PMFTC). In a meeting between FTC management and Fortune Tobacco Labor Union (FTLU) last week, the latter was informed that older workers will be offered an early retirement plan while younger employees will be terminated and then hired as new workers in the merged company.

Arnulfo Macabutas, FTLU vice-president, said that “We demand that no worker be retrenched and instead that they be absorbed as regular employees of PMFTC with no loss in seniority, wages or benefits. The union and the collective bargaining agreement must likewise be recognized by PMFTC.”

FTLU members have been mobilizing in mass actions to press for its demand. They will be participating in “National Day of Action for Regular Jobs and Against Contractual Employment” on Thursday. Last November 10, some 500 FTLU members held a torch parade from the factory to the Concepcion Church in Marikina City. Yesterday FTC workers were set to hold prayer rally in front of the factory gates but heavy rains forced cancellation of the protest.

FTLU is basing its demand on jurisprudence that in cases of corporate mergers, there is a continuation in the employment relations from the original companies to the merger entity. “The Supreme Court has ruled that the successor company absorbs all the obligations of the original company with regards to its employees including any exclusive bargaining agent and collective bargaining agreement,” Macabutas.

Last February FTC and Philip Morris Philippines, Inc. announced the formation of the joint venture company PMFTC with a 50-50 stake from the original companies. The merger created a monopoly in the tobacco industry in the country since FTC controls 60% share of the market while PMPI has 30%.

The various labor groups that have denounced the decision of Labor Secretary Rosalinda Baldoz on the mass layoff at Philippine Airlines will hold the nationwide protest to push for government regulation against contractualization. Aside from FTLU, the Philippine Airlines Employees’ Association (PALEA) will lead the main activity at Ayala Ave. in Makati. Big labor groups that have confirmed attendance in the march along Ayala Ave. include the Trade Union Congress of the Philippines, Partido ng Manggagawa, Koalisyon Kontra Kontraktwalisasyon (KONTRA), Labor Alliance for Better Order and Reform (LABOR), and the Church-Labor Conference (CLC).

Rallies will also be held in other key cities like Davao, General Santos and Bacolod on November 25. In Cebu City the mass action will be held tomorrow with a labor forum at the ALU Building in the morning and then an afternoon rally at the Department of Labor and Employment office.
Posted by Juan Manggagawa at 1:13:00 PM

Hey, I attempted to email you pertaining to this post but aren?t able to reach you. Please e-mail me when get a moment. Thanks.