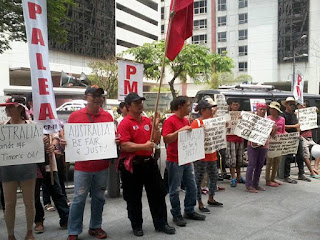 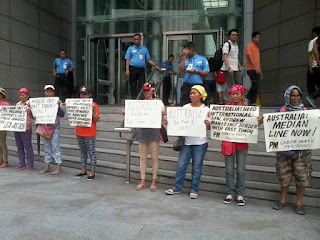 As part of an internationally coordinated series of protest actions, militants rallied at the Australian embassy today to demand that Australia establish a fair maritime border according to UNCLOS and international law. Similar to the dispute over the West Philippine Sea, East Timor is contesting claims by Australia on the oil and gas resources in the Timor Sea.PR0112
Members of Partido Manggagawa (Labor Party-Philippines) and Philippine Airlines Employees Association-International Transport Workers Federation held a solidarity action at the Australian embassy in Makati today to signify support for the just demand of East Timor. The protesters shouted “Australia: Don't be a bully in the Timor Sea like China in the West Philippine Sea!”
Similar actions at Australian embassies or Australian government bodies are slated in East Timor, Australia, Indonesia, Malaysia and the US from March 22 to 24.
Just before East Timor gained independence as a country, Australia withdrew from the UNCLOS and thus there has been no maritime border fixed between the two countries except for provisional arrangements dictated by the latter.
At stake in the dispute is control over oil and resources which are currently exploited by Australia but which will lie within East Timor’s jurisdiction as per UNCLOS. East Timor demands control over the resources so it can be used for their national development.
Among the slogans highlighted in today’s protest are:
Hands off East Timor's oil!
Australia: Median line now!
Australia: Heed international law, Draw maritime border with East Timor!

We are Women, We are the Agenda – Partido Manggagawa

Women workers and poor led by the labor partylist group Partido Manggagawa (PM) marched in Mall of Asia and Mendiola today together with other feminist organizations to commemorate International Women's Day.

The agonies of having to endure ages of physical and emotional violence and living under the pain of deprivation due to economic marginalization are problems unique to women and that these problems should have long been addressed by the past and present administrations.
But for PM, the official theme for this year’s Women Day celebration,“Kapakanan ni Juana, Isama sa Agenda,” speaks for itself:  Women remain at the margins and the call to include their agenda in this coming elections is an admission of repeated neglect recited creatively in positive tones.
“Bakit isali lang sa agenda gayong ang kababaihan mismo ang dapat agenda?  Women in production and reproduction suffer the worst kind of injustice in this country.  Aside from violence women also assumed the burden of dealing with poverty and poor delivery of social services such as high prices of goods, taking care of their sick and sending their children to school  without or short of basic provisions, among others,” stated PM Secretary General and partylist nominee, Judy Ann Miranda.
Miranda led the PM contingent who joined the local women activities held at the seaside grounds of a mall in Pasay, organized by the Samahang Magkakapitbahay sa Lungsod ng Pasay.   In her speech after the marches and Zumba dancing in Pasay, Miranda called on women living in poor communities to collectively pursue demands for decent jobs, universal healthcare,  facilities for child care, and even for free public laundry systems.
Aside from the Pasay activity, PM members also joined other groups in separate marches to Mendiola organized by the Freedom from Debt Coalition (FDC) and Women March.
PM, which is running under the partylist election this May, explained that half (50%) of the country’s women working population (compared to 20 percent among men) remain inactive member of the labor force because of lack of jobs and the traditional pull of domestic work. The unemployment rate for women is also higher (35.9% in SWS 2013 survey) compared to men (21.2%).   Accordingly, the informal economy is made up mostly of women working in underpaid, irregular jobs of different types.
“Kung hindi magbabago ang ganitong sitwasyon, si Juana ay mananatiling tagasilbi lang sa bahay.  Or once semi-skilled or unskilled women are given the chance to land a job, they are relegated to meticulous but low paying, contractual jobs in the service sector, or brave serving as contractuals in risky domestic work abroad,” added Miranda.
The partylist group said it is under this condition that women workers should be accorded decent jobs in the country and to have access to a wide range of social services and social protection such as reproductive healthcare, childcare facilities, and other forms of social security insurance, including living pension for elderly women.