“Retrenched PAL workers have endured the of joblessness and poverty for the last 18 months as a result of the corporate greed of Lucio Tan and his outsourcing plan. But PALEA will endure this trial, win the fight and resurrect stronger,” declared Alnem Pretencio, PALEA vice president.

The Kalbaryo march will start at the PALEA protest camp at 4:00 pm and then proceed to the Our Lady of the Airways Parish where a short program will be held. Marchers will bring a makeshift cross to symbolize the plight of workers and highlight the call “Kalbaryo ng Manggagawa, Kapitalista ang may Gawa.”

After the activity at OLAP, the rallyists will march back to the PALEA protest camp for another program. The highlight of the program will be the lighting of 18 torches to reflect the 18 months of PALEA’s fight against outsourcing and contractualization.

PALEA’s international supporters also held a “Global Day of Action” today in solidarity wit its fight and to press PAL management to immediately resolve the labor row. In , where PALEA president Gerry Rivera is attending a labor conference, he and Australian unionists from the Maritime Union of Australia leafleted the PAL flight out of the city today.

Leafleting of departing PAL flights will also be done in and by Canadian airline unions and by the hotel workers. “PALEA’s fight is also our fight. The struggle against outsourcing and contractualization is a worldwide fight that can be won by global solidarity and action,” the groups abroad declared.

Las week the Court of Appeals (CA) released a decision affirming the decision of the Office of the President allowing the outsourcing plan at PAL. Next week PALEA will file a motion for reconsideration to the CA decision even as it proceeds with the ongoing talks with PAL management for negotiated settlement to the long-running dispute.
Posted by Juan Manggagawa at 1:27:00 PM 4 comments:

The militant Partido ng Manggagawa (PM) today slammed as harassment the early morning raid by the police of the office of the union of the giant mining company Carmen Copper in , . The raid follows a similar raid on the house and resort the union treasurer last Tuesday in which four persons were arrested.

“With a month to go before Labor Day, the union repression in Cebu sadly highlights the state of workers rights in the . Truly the is the second most dangerous place for trade unionists in the whole world,” Renato Magtubo, PM national chair said.

PM is also demanding the release of the Toledo Four arrested in the Tuesday raid. The group is accusing the police of planting a 45 caliber pistol allegedly found in the union office this morning and other arms supposedly seized in the raid last Tuesday. The police raid of the residence of union treasurer Roldan Cansancio was supposedly due to his involvement in the killing of a ward leader of Sonny Osmena in last month.

“The police in collusion with certain elements in Carmen Copper management are trying to divert the real issue which is the brewing labor dispute. They are also trying to silence one of the very vocal critics of management’s contractualization scheme and unfair labor practices,” insisted Dennis Derige, PM-Cebu spokesperson.

Labor relations at Carmen Copper started to get strained late last year when management started to implement a contractualization scheme that affected regular jobs. The union Panaghugpong sa Mamumuo sa Carmen Copper (PAMCC) also became increasingly critical of the damaging impact to the environment of the company’s open pit mining. A full blown labor dispute erupted when it was discovered that management formed a company union in a bid to bust PAMCC.

Meanwhile PAMCC president Tony Cuizon condemned the raid and defended Cansancio. “This is unacceptable! The PNP Regional Intelligence Division has no business intervening in the labor dispute. They timed the raid when all of union officers, including Cansancio, are here in attending an International Labor Organization seminar so that we cannot defend ourselves from their malicious attack. This is a cowardly act.”

Cuizon further added “They are trying to silence my long time partner in the union because he is my alter ego and very vocal against management abuses. They are trying to discredit his credibility by portraying him as underworld character when in fact he is active in fighting criminality in the province as a CIDG volunteer. Roldan could have turned his back on me when management people tried to convince him to capitulate but he did not and remained loyal to the union. This is the kind of men the union movement needs and I have high regard for him.”

Cansancio and PAMCC declared that they are readying their own charges against those responsible for the raid. PAMCC and PM also announced protests are to be held in the coming days. The groups are also alleging police brutality occurred as a 13-year old minor was pinned down the floor, an Armalite rifle was pointed at him and he suffered verbal abuses from the raiding team.

“We cannot take this sitting down. The raids have a chilling effect not on PAMCC but also to the labor movement in general. We call on the Department of Labor (DOLE) and Commission on Human Rights (CHR) to intervene and investigate this act by the police. Certainly, the PNP violated our human rights and rules on labor disputes,” Cuizon ended.
Posted by Juan Manggagawa at 3:43:00 PM No comments:

Fourty (40) days after Alona Bagayan, an OFW from Kalayaan, Laguna allegedly committed suicide in Dubai, her kin can only hold and look at her portrait, shed tears and wish that her body be brought home soon.

Her younger sister, Maricel, was shedding tears while explaining to family members and some press people that an official of the Department of Foreign Affairs (DFA) told her that investigation on the case is still going on, 40 days after Alona’s death.

The Partido ng Manggagawa (PM) is also getting disappointed with the slow-pace investigation. “Fourty days have passed and yet the family does not have access to basic information such as on Alona’s employer, her address in Dubai where she was found dead, and even a picture of her remains.  Facing a blank wall is more depressing for the Bagayan family,” said PM spokesperson Wilson Fortaleza.

A mother of four, Alona Bagayan left Kalayaan for Dubai to work as domestic helper.  She was deployed abroad by the Al-Masiyah Overseas Placement Agency, Inc. with office in Ermita, Manila.  The Philippine Overseas Employment Agency (POEA) has  suspended the operations of Al-Masiyah.

“She was a happy mother when she left thus her relatives strongly doubt that she would commit suicide after less than a week,” added Fortaleza.

The labor group stressed that overseas Filipino workers have been instrumental in keeping the Philippine economy afloat despite the global financial crisis .  Unfortunately the government and related agencies remain negligent and unprepared to deal with the many risks our OFWs are facing abroad.

The government also failed to address the growing unemployment problems through strategic programs that will generate regular jobs. 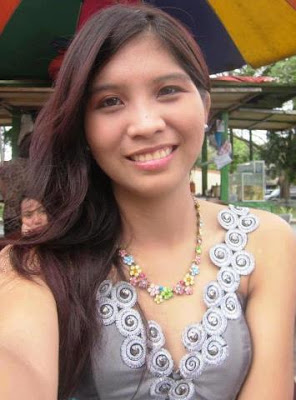 The militant Partido ng Manggagawa (PM) mourned the death of UP student Kristel Tejada and called for a stop to the controversial “no late payment” policy.  The Manila Collegian, UP school paper reported that Tejada committed suicide allegedly due to financial constraints.  Since last year, UP has been implementing the “no late payment” and “forced LOA” policies that are being criticized by PM as anti-student and anti-poor.

“The no late payment and forced LOA policies kill. Tejeda’s suicide is both sad and enraging.  UP is a public university being subsidized by the government for the education of the country’s future leaders.  Over the years, it has been crafting and implementing policies that have made it difficult for poor but deserving students to enter the university, including the STFAP.  Dati kung matalino ka, you deserve to be an ‘Iskolar ng Bayan,’ ngayon kailangan you have to have money, too.  That is not a problem to those who can afford UP education, but how about poor students?” said Judy Ann Miranda, PM secretary-general and a former UP student leader.

“’Education is a right, not a privilege.’  The death of Tejda should not be in vain..  Rather, it should lead to reforms that would address discrimination against poor students in the premier public university because of inability to pay tuition fees.  This is not for UP alone but so with the rest of state colleges and universities,” Miranda added.

PM-Kabataan is advocating a set of demands called “Apat na Dapat” as a challenge to candidates in the elections and an increase in the budget for education is among them.
Posted by Juan Manggagawa at 2:16:00 PM 7 comments: 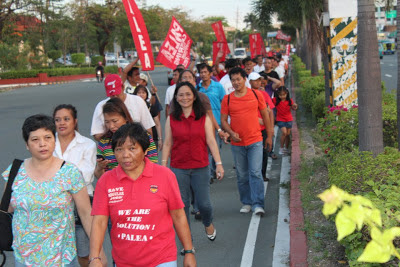 The abuse of women, physical and otherwise, is a major theme of the worldwide commemoration of women’s day. The rallyists brought makeshift chains bearing the major economic demands of women. The women workers also partook of a boodle fight of tuyo to highlight the grave poverty and double burden of working women.

Among the economic burdens of women raised during the activity are the lack of job opportunities for women, outsourcing and contractualization as experienced by PALEA, and high prices of basic commodities and services like water and electricity.

After this activity, PM and PALEA women members will be participating in women’s groups activities on anti-violence against women tomorrow.
Posted by Juan Manggagawa at 8:10:00 AM 4 comments: