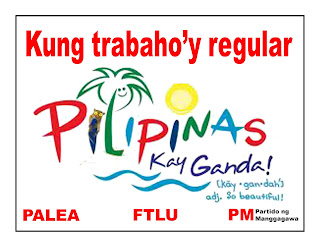 The central activity is a march along Ayala Ave. in the afternoon by some 2,000 members of the various labor groups. The mood will be festive with an ati-atihan joining the labor unity march.

The Day of Action starts early with a Lakbayan of Calabarzon workers led by the United Cavite Workers Association that will assemble at 7:00 am in Zapote. The Lakbayan Laban sa Kontraktwalisasyon will make a stop at Baclaran Church by 10:00 am before proceeding to the assembly area at Makati Fire Station. TUCP will join PALEA, KONTRA, LABOR, CLC and PM at the fire station while KMU will link up at the corner of Paseo and Ayala Ave.

Rallies will also be held in Davao City and Bacolod City tomorrow. In Cebu City the mass action will be held today with a labor unity forum at the ALU Building in the morning and then an afternoon rally at the Department of Labor and Employment office.

Rivera added that “The Labor Department plans to hold a nationwide tripartite conference on outsourcing in Davao. The National Day of Action is our way of expressing our position on outsourcing, mergers, layoffs and other forms of restructuring. We hold that management prerogative is not absolute and cannot trample upon workers’ right to job security and the freedom to unionize. The constitutional mandate for living wages, security of tenure and collective bargaining should not be dead letters but must be made real in life.”

The campaign for regular jobs will also be the theme of the Bonifacio Day commemoration with PM, PALEA and the Fortune Tobacco Labor Union to march on Mendiola on November 29.
Posted by Juan Manggagawa at 10:46:00 AM