The workers of Eziconnect Philippines decried the furtive removal of computers from their call center which had shutdown without due notice. They revealed that on December 24 several men took out six computers, a day after the Department of Labor and Emploment (DOLE) made a site visit. Fifteen employees filed a complaint for illegal closure one day after Eziconnect suddenly shuttered on December 21.

Gerard Escubido, one of the 15 Eziconnect employees, exclaimed that “Instead of a Santa Claus bearing gifts on Christmas eve, here we have Ebenezer Scrooges stealing assets that can be used to defray out claims for unpaid wages and separation benefits. We have identified the perpetrators who removed the Eziconnect computers and we also have a suspect who masterminded it.”

“We call on Eziconnect owner Rodney Kafer to honor obligations to his workers who have loyally served the company for the past several years,” added Escubido. Kafer is a former Australian rugby player and Fox Sports commentator.

Dennis Derige, Partido Manggagawa-Cebu spokesperson who is assisting the Eziconnect employees, stated that “We will duly notify DOLE-7 of the incident and demand appropriate action once the government offices open after New Year’s day. It seems Eziconnect did not just shutdown illegally but is also a runaway shop.”

Aside from half a month of salaries and separation pay, the Eziconnect workers are demanding financial assistance and damages.

Derige insisted on prompt action from the government as the illegal shutdown of Eziconnect was the fifth case in Metro Cebu that they have encountered in the last four years. He cited the earlier cases of Direct Access, Cordia, Leadamorphosis and Blue Connect in which a total of about one thousand workers were adversely affected by sudden cloures.

“Through the help of PM partylist, the workers of the four call centers got favorable settlements or awards from the National Labor Relations Commission (NLRC). Although in the case of Leadamorphosis workers, they have yet to receive a cent of the P36 million NLRC decision because the owners are in the USA,” Derige elaborated.

The partylist group reiterated its request that government require BPO’s to put up a bond to compensate workers’ money claims in case of sudden or illegal closure. “Call centers should set aside two months worth of salaries of all workers they intend to hire which will be used to defray unpaid salaries, benefits and separation pay,” Derige explained.

PM asks candidates for their agenda on BPO workers

The labor partylist Partido Manggagawa (PM) today asked presidentiables to spell out an agenda for BPO workers in the context of the sudden closure of a call center in Metro Cebu. PM and the group Inter-Call Center Association of Workers (ICCAW) disclosed that it has come across five call centers with more than a thousand workers in total that illegally shutdown in the last four years, including the latest, Eziconnect Philippines.

He added that “Is there a presidentiable brave enough to be a jedi to safeguard peace and justice for call center workers?”

PM is advocating strict government regulation of the BPO industry to weed out fly by night companies that are not financially equipped to run the business and does not respect labor rights. The partylist group is also calling for industry-wide standards for wages, benefits and entitlements that must be well above the minimum mandated by law and commensurate to the profitable dollar-earning nature of the call center industry.

ICCAW meanwhile aims to be a voice and advocate for call center and BPO workers so that the almost a million  employees in the industry who are entirely unorganized can enjoy protection.

Earlier, PM called for government to require BPO’s to put up a bond for workers claims in case of sudden or illegal closure. The partylist group is demanding that call centers set up a bond equivalent to two months wages of all employees they intend to hire to defray unpaid salaries, benefits and separation pay.

Gerard Escubido, one of the Eziconnect workers, revealed that the company shutdown last December 21 without due notice, leaving its 30 employees with unpaid wages, 13th month pay and separation benefits. Its owner, Australian rugby player and Fox Sports commentator, Rodney Kafer, has not communicated with its workers about the company’s obligations.

Fortaleza disclosed that some 120 workers of another call center, Leadamorphosis, that illegally shutdown a week after New Year’s day of 2014 in Metro Cebu, won a Php 36 million award from the National Labor Relations Commission but has yet to receive a centavo as its owner is in the USA.

“Eziconnect must not become another Leadamorhosis. Thus we reiterate, who among the presidentiables has a platform to cater to the rights and welfare of BPO employees?,” Fortaleza exclaimed.

Partylist calls for BPO’s to put mandatory bond for workers claims as another call center illegally closes in Cebu:

The labor partylist group Partido Manggagawa (PM) called on the government to require BPO companies companies to put up a bond that will be used to pay workers claims as another call center illegally shuts down in Cebu. Eziconnect Philippines Inc. of Mandaue City closed abruptly last December 21 leaving its 30 employees jobless this christmas season with unpaid salaries and separation pay.

“Unfortunately Ebenezer Scrooge is alive and he is an Australian. The irresponsible owners of Eziconnect have stolen christmas from their hardworking workers,” declared Rene Magtubo, PM chair and one of its partylist bets. Eziconnect is owned by Australian Rodney Kafer, a former rugby player and present Fox Sports commentator.

According to the group Inter-Call Center Association of Workers (ICCAW), which is assisting the Eziconnect workers together with PM, this latest illegal closure is the fifth in the last four years that it has encountered.

A day after the closure, Eziconnect workers filed a complaint at the Department of Labor and Employment (DOLE) Region 7 office. Yesterday a meeting was called by DOLE-7 where the workers faced off with their Filipino manager. The Eziconnect workers are demanding one month of unpaid salaries, 13th month pay, separation benefits and financial assistance.

Gerard Escobido, one of the Eziconnect employees, said that “We had loyally worked for the company for the last several years and we feel betrayed that its owners, Kafer among others, would run away from its obligations to us.”

Magtubo called on the government to require BPO's to put up a bond equivalent to two months salaries of all workers they intend to hire which will be used to defray wages, benefits and separation pay in case of sudden or illegal closure.

ICCAW and PM had earlier helped workers of call centers Direct Access, Cordia, Leadamorphosis and Blue Connect, all based in Cebu, in their fight for unpaid money claims. In all cases, workers had won awards or settlement.

When Direct Access illegally shutdown in 2012, its workers fought to get their separation pay and were also granted employment in a new call center. ICCAW was formed as a result of the pioneering fight of Direct Access workers. Meanwhile in the case of Leadamorphosis, workers won a P36 million award two years ago.

“The BPO is sunshine industry according to the government but it must do more to ensure workers rights and welfare are protected. Since it is a profitable dollar earning industry, employers must provide its workers with above average wages and benefits,” argued Magtubo. 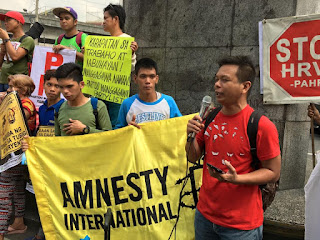 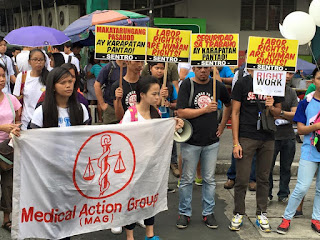 There is systemic continuity in labor rights violations under different administrations and under the ‘tuwid na daan’, these violations have simply gone worse.
In a statement, the partylist group Partido Manggagawa (PM) condemned the unabated problem of extrajudicial killings in the country but at the same time it underlined the need to recognize forms of human rights violations that are more systemic and pervading in nature.

PM joined the Philippine Alliance of Human Rights Advocates (PAHRA) in celebrating the International Human Rights Day in a march of several hundred rights defenders and advocates from Espana UST to Mendiola. Some of the rallyists were dressed in bloodied shirts and dresses to symbolize the persistence of human rights violations in the country.
The group said the country’s compliance to the UN clusters of economic and socio-cultural rights (ESCR) is very dismal as most of its policies dealt with trade and investments rather than with raising the Filipinos’ quality of life.
“Labor rights, which include the rights to enjoy freedom and quality standard of living are undermined by economic policies that provide utmost partiality to business and the free market, said PM spokesman Wilson Fortaleza.
According to Fortaleza, labor conractualization as one form, is an epidemic that kills the freedom of workers to associate and to get fair share of economic benefits from their bosses such as the living wage provided under the Constitution.
He explained further that the harsh picture of inequality in the country, with a handful of families in control of more than half of our GDP, is the logical outcome of this systemic failure to uphold human rights.
“Precarious employment is not as controversial as the 700 or 1,700 souls that suffered under Rodrigo Duterte’s hand but it is as lethal as other policies that deny millions of people the meaning of good life,” said Fortaleza.
More than half of the country’s  41 million labor force work under precarious working conditions characterized by low paying, irregular, and informal work arrangements.  They also are burdened by high prices and the poor state of social services in the country.