PALEA testifies at Washington DC on labor rights in the Philippines

The Philippine Airlines Employees Association (PALEA) president Gerry Rivera testified at at dawn today (noon January 24 EST) on the suppression of labor rights by the Philippine government. Rivera faced-off with government officials led by Labor Secretary Rosalinda Baldoz at the hearing held by the US Trade Representative (USTR).

“PALEA presents a significant case in reviewing whether or not the have taken or taking steps to afford workers their internationally recognized rights. We submit that Philippine government has abused its power to assume jurisdiction (AJ) of strikes thereby curtailing workers’ rights to freely organize and bargain collectively. PALEA was not allowed to strike on two crucial occasions to protest the mass termination of some 2,600 workers and yet Philippine Airlines (PAL) was permitted to proceed with the layoff despite a pending case at the Court of Appeals,” Rivera argued before the USTR subcommittee on the Generalized System of Preferences (GSP).

This is not the first time that the government, specifically Sec. Baldoz, had to face inquiries abroad on the handling of the PAL-PALEA labor row on outsourcing and contractualization. Last December 7, Baldoz was questioned by a delegate to the International Labor Organization regional meeting in on PALEA’s protest.

Aside from Rivera, Josua Mata of the Alliance of Progressive Labor and Brian Campbell of the International Labor Rights Forum (ILRF) also spoke before the hearing to corroborate PALEA’s testimony and paint the “big picture” on the state of labor rights. On the government side, Justice Undersecretary Francisco Baraan III, Labor Undersecretary Rebecca Chato, Ambassador Jose Cuisia, Jr. and other Philippine embassy officials accompanied Baldoz.

At stake at the hearing are trade benefits accorded by the government to countries which it deems respects core labor rights and standards. The GSP subcommittee which held the hearing for the “review of country practices” includes representatives of the USTR, Department of Agriculture, Department of Commerce, Department of Labor, Department of State and Department of Treasury. The was put under scrutiny based on the petition filed by the ILRF, a DC-based advocacy organization.

Rivera also met with the top union officials of the AFL-CIO and its constituent organizations to solicit support for its fight against contractualization and boycott campaign. Among those which expressed concern and solidarity was the Association of Flight Attendants which will include PALEA’s plight in its upcoming “Occufly” protest in on February. US-based unions and Fil-Am groups are spearheading boycott campaigns in the West Coast cities of , , and where PAL has its most profitable flights.

Rivera’s testimony came on the heels of renewed protests by PALEA yesterday. Members of PALEA together with Partido ng Manggagawa held a motorcade from the protest camp to PAL’s offices at the airport, in and Allied Bank Building in Ayala.
Posted by Juan Manggagawa at 2:16:00 PM 1 comment:

The Philippine Airlines Employees’ Association (PALEA) welcomed the Chinese new year with a motorcade today to highlight its call to new investors of Philippine Airlines (PAL) for the reinstatement of retrenched workers. PALEA is “watching intently” not necessarily of “welcoming enthusiastically” reports of PAL’s sale to interested investors such as Ramon Ang of SMC and Manny Pangilinan of Metro Pacific.

Nonetheless the union is hoping that a new owner may lead to a breakthrough to resolve the labor dispute. “PALEA’s fight continues in the year of the water dragon. This promises to be the year of PALEA’s return to work,” averred Bong Palad, PALEA secretary.

At 10:00 am, the PALEA motorcade left the protest camp outside the PAL In-Flight Center then proceeded to the Nichols offices onto the Allied Bank Building at Ayala where Lucio Tan holds office then the Senate for the impeachment trial and ended at the airline headquarters at the PNB building at .

At the Senate grounds, Palad insisted that “The ‘Coronavela’ is a case of the teapot calling the kettle black and the kettle accusing the teapot it is unclean. Pnoy and may be fighting over Gloria Arroyo and Hacienda Luisita but both are beholden to Lucio Tan as revealed by the plight of PALEA and the Flight Attendants and Stewards Association (FASAP).”

“Since Lucio Tan has been closed to even talking with PALEA, then any change in PAL’s management leaves open the possibility of a change in attitude to the protracted labor dispute,” Palad said. He explained that “PAL’s new owners may in the end be no different from Lucio Tan as regards its attitude to PALEA. But as it stands now, anybody but Lucio Tan is better. So in the meantime, PALEA’s fight continues and it demands of any new owner the reinstatement of retrenched workers to their regular jobs,” Palad explained.

Contrary to Presidential spokesperson Edwin Lacierda’s view that investments by a new owner in PAL will lead to improve image, PALEA insists that only the return of the locked out skilled and experienced workers will make PAL fly again. “PAL’s operations have deteriorated not because of a lack of finances and shiny new planes but because of the ‘palpak’ service by inexperienced contractuals and scabs. It is not a refleeting but the reinstatement of PALEA members that will lead to PAL’s return to normalcy. Bring back PALEA members and PAL will soar again in three days,” Palad asserts.

He also revealed that PALEA president Gerry Rivera is set to testify on tomorrow (January 24 noon EST) at on the repression of labor rights by the government. PALEA has been invited to the hearing by the US Trade Representative on the petition by the government for trade benefits under the GSP (general system of preferences). Countries which respect internationally core labor rights and standards receive preferential treatment from the .
Posted by Juan Manggagawa at 9:24:00 AM 384 comments: 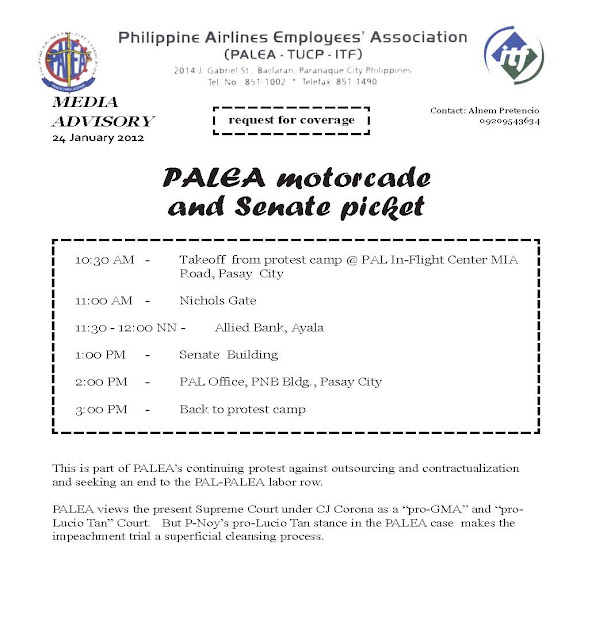 WHAT: PALEA to hold protest motorcade and rally at impeachment trial

WHERE: Motorcade starts at PALEA protest camp (10am) proceeds to PAL Nichols offices (11am) then Allied Bank, Ayala Ave (12 noon) onto Senate (1pm) and ends at PNB Building at Macapagal Ave.

DETAILS: PALEA welcomes the Chines new year with the demand on new PAL investors for the reinstatement of retrenched workers. PALEA hopes that “year of the water dragon” is the year that its members return to their regular jobs. The union is “watching intently” and not necessarily “welcoming enthusiastically” reports of PAL’s sale to interested investors such as Ramon Ang of SMC and Manny Pangilinan of Metro Pacific.

Meanwhile PALEA president Gerry Rivera is set to testify on Wednesday (Jan. 24 noon EST) at on the repression of labor rights by the government. PALEA has been invited to the hearing by the US Trade Representative on the petition by the government for trade benefits under the GSP (general system of preferences). Countries which the deems as respectful of internationally core labor rights and standards receives preferential treatment.
Posted by Juan Manggagawa at 10:36:00 PM No comments:

In a hearing yesterday at the Pasay Hall of Justice, members of the Philippine Airlines Employees Association (PALEA) asked the city prosecutors to dismiss the violation of Civil Aviation Authority (CAAP) law case filed by the management against them in the aftermath of the September 27, 2011 protest that crippled the operations of Philippine Airlines (PAL). In an allusion to the mythical Spartans, PALEA President Gerry Rivera declared that “The respondents to the case, the PALEA 300 are brave men and women who will die fighting instead of surrendering to tyranny by PAL.”

In a picket to coincide with the hearing, PALEA insisted that the case was part of the many harassment cases thrown at PALEA members after the union strongly opposed PAL’s outsourcing plan. The next hearings are scheduled for February 2 and 9.

“We eat PAL harassment cases for breakfast, lunch and dinner,” stated Rivera. He claimed that “PAL is blindly shooting nuisance cases at PALEA members in a desperate bid to force them to accept the separation package and sign up for the illegal labor contractors Sky Logistics and Sky Kitchen. Some of the 258 named respondents were active participants in protests before and after September 27 but were on day off that fateful day.”

The union asserts that no company equipment was ever damaged during the September 27 protest. Instead the union knows that it was the improper use of an airstep by an inexperienced and unskilled scab that caused an accident where an Airbus A340 with aircraft ID 3430 plane door was dented.

Rivera asserts further that PAL services deteriorated sharply after September not because of damaged equipments but due to lack of skilled and experienced manpower after PALEA members, in opposition to contractualization/outsourcing, refused to transfer to assigned service providers.

“Up to now, more than three months after the outsourcing, passenger complaints of faulty services by  contractual scabs working at PAL are piling up.  It is therefore not the equipments but the flag carrier’s reputation that is being badly damaged,” declared Rivera.

PALEA insists that PAL’s waning reputation and deteriorating quality service can only be saved by getting its regular workers back. Supporters of PALEA are calling for a boycott of PAL and its sister company Air Philippines until the laid off workers are reinstated to their regular jobs.
Posted by Juan Manggagawa at 9:31:00 AM No comments: