The Partido ng Manggagawa supports the demand for a wage hike aired by TUCP but believes that the regional wage boards are the wrong venue. Instead of a petition at the wage boards we call on the TUCP to join the rest of the labor movement that has come together to push for a legislated wage hike.

The workers' clamor for economic relief through wage hikes and tax exemptions remain unmet with the stonewalling by the House of Representatives of the P125 legislated salary increase. Whether the workers get P75 or P125 is of secondary concern. What is paramount is an honest-to-goodness wage hike that will be truly beneficial because it is across-the-board and nationwide in scope.

The 18-year track record of the wage boards is a sorry history of wage orders that are not just stingy and not across-the-board but also full of exemptions, deferments and other loopholes. Thus the wage orders, though almost yearly promulgated, have been of little benefit to the greater majority of the workers. The wage boards serve as a pillar in the cheap labor policy of government. They must be abolished for being inutile.

A legislated, across-the-board and nationwide wage hike is a realistic possibility of course only with the convening of the new Congress in July. But a petition for the P75 wage hike through the wage boards will also be a valid prospect only after July with the lapse of the one year prohibition for new wage orders. Thus labor movement must use the time to muster its strength for the wage fight in the last half of the year.

If the TUCP will march side by side with of the rest of the labor movement to struggle for a legislated wage hike, the balance of forces would be better for a victory this time around. On the other hand if the TUCP turns its back on its brothers and sisters in the labor movement and goes solo in its petition at the wage board then the capitalists and the state will be applauding the break in labor's unity. ###
Posted by Juan Manggagawa at 6:37:00 PM No comments:

The Partido ng Manggagawa (PM) is the only labor-based party-list group in the House of Representatives. Its votes in the 2001 and 2004 elections - 260,000 votes and 450,000 votes respectively - far exceed that of other organizations that claim to represent the working class.

PM combines work inside Congress and mobilization outside parliament to defend and advance the rights and welfare of the workers who are the majority of Filipinos today. In the age of globalization, the workers endure low wages, insecure employment, widespread layoff, high prices and inadequate social services. There is thus a categorical imperative to protect labor rights and workers interests and that is the paramount objective of PM as the political party of the Filipino working class. 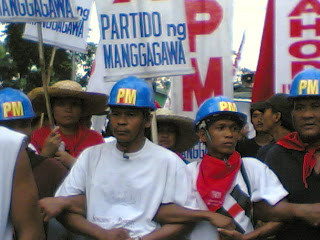 If Philippine democracy is not just a formality but has substance, then the workers who are the majority must be represented in Congress. PM is the voice and conscience of the Filipino working class whether they are the factory workers or the office employees, the farm workers in the countryside or the millions of the urban poor.

In recent years, PM is best known for tirelessly pushing for the P125 legislated wage increase. The choreography between work inside parliament and mobilization in the streets is the secret behind the advance of the P125 wage hike from seemingly an impossible mission to a realistic possibility.

Complementary to campaigning for workers' issues, PM has also fought for concerns of other sectors. PM was instrumental in the civil society group called Task Force Subic Rape Case that successfully sought justice for the rape victim known as Nicole. PM joined the Filipino people in celebrating the first conviction of a US soldier guilty of crimes and in condemning the transfer of jurisdiction back to American hands.

PM was a petitioner to the Supreme Court case alleging irregularities in the midnight approval of the anti-poor 10% VAT on additional products. The also group backed some 60,000 teachers in their appeal to the Supreme Court for the release of their cost of living allowances.

Its incumbent representative in Congress is Renato “Ka Rene” Magtubo who is the union president of Fortune Tobacco that is owned by the second richest Filipino today, Lucio Tan. He was called by the media as a maverick for resolutely fighting for workers demands in a Congress that is packed with representatives of the rich and powerful, and for exposing in 2001 the payola given to solons for supporting the privatization of the power industry that is the cause of the high cost of electricity.
PM has some 100,000 card-carrying members from as far north as the Mountain Province and as down south as Basilan. The reach and influence of PM however is double or triple that number through its fraternal relations with more than 400 labor unions and hundreds of urban poor groups.