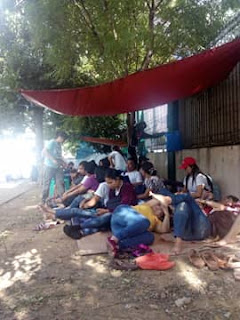 A labor dispute in a garments factory in the First Cavite Industrial Estate in Dasmarinas, Cavite entered its second week with no clear resolution in sight. A hearing at the National Conciliation and Mediation Board last Monday ended without any agreement between the union and management of Sejung Apparel Inc.

Industrial relations analysts and even Department of Labor and Employment (DOLE) officials have noted a rise in labor disputes. This year 162 notices of strikes have been filed and 13 have matured into actual strikes. Many of the disputes are due to demands for regularization.

Even the union formed at Sejung garments was partly motivated by grievances of contractualization as many workers were hired as temporary employees for years without being regularized. The DOLE inspected the factory last May due to complaints about endo and benefits.

But the immediate cause of the pending labor dispute at Sejung was the lockout by management. In August, workers voted to be represented by a union. Two weeks ago, the union submitted a proposal for a collective bargaining agreement. After just a week, the company suddenly declared a temporary closure allegedly for lack of orders. Workers however contend that there was pending order that was abruptly stopped by the management. Thus the union filed for a notice of strike due to union busting.

“This is not the first time and unfortunately not the last time that a recently unionized factory suddenly closed down. This is the action of last resort by management in order to bust and avoid unions. We have seen this happen with the Faremo garments factory at the Cavite Economic Zone in 2016 and the Cebu Nisico electronics firm at the Mactan Economic Zone in 2017,” stated Rene Magtubo, national chair of Partido Manggagawa (PM).

PM has been assisting export zone workers in Cavite and Cebu in their bid to improve wages and working conditions. “We call on the DOLE and the Philippine Economic Zone Authority (PEZA) to intervene as this is a clear case of violation of the freedom of association (FOA). While the dialogue between labor groups, DOLE and PEZA about ensuring respect for freedom of association has been much delayed, union busting complaints like that in Sejung are happening with no action from government institutions. This is among the reasons the International Labour Organization last June resolved to investigate the government’s enforcement of Conventions 87 and 98 about freedom of association and collective bargaining respectively,” Magtubo explained.