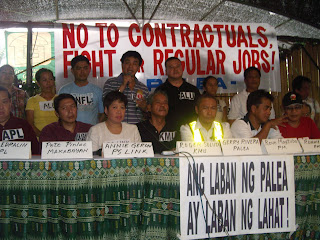 For the first time in a long time, rival labor groups came together in a common cause to support the fight of the embattled Philippine Airlines Employees’ Association (PALEA) and call upon President Benigno Aquino III to reverse the controversial ruling by Labor Secretary Rosalinda Baldoz allowing the planned mass layoff at Philippine Airlines (PAL).

In a gathering last Monday in Quezon City, leaders of the Trade Union Congress of the Philippines (TUCP), Kilusang Mayo Uno (KMU), Alliance of Progressive Labor (APL), and Partido ng Manggagawa (PM) among others agreed on a statement of solidarity with PALEA. The unity statement also condemned the Baldoz ruling as a “clear and present danger to labor rights and may be the last nail on the coffin of job security.”

The meeting ended with a public announcement of the unity statement. Gerry Rivera, PALEA president and PM vice chairperson, said that “We call on the government to take notice of this historic solidarity of the full spectrum of the labor movement to defend regular jobs and to fight labor contractualization. It is not too late for Malacanang to intervene in the PAL labor row in interests of safeguarding Constitutionally-mandated workers rights in the face of corporate restructuring.”

Former Sen. Nene Pimentel also graced the event and aside from expressing support for PALEA also offered to assist in the legal aspect of the fight including the planned filing of a case at the Court of Appeals.

“This labor solidarity is an expression that PALEA’s fight for regular jobs goes beyond the interests of PAL employees but involves as well the welfare of all workers. This will not be a country fit for our children if no one enjoys the dignity of a regular job. A regular job that provides decent wages, substantial benefits, security of tenure and the protection of a union should be the Filipino way of life,” Rivera elaborated.
Posted by Juan Manggagawa at 12:06:00 PM