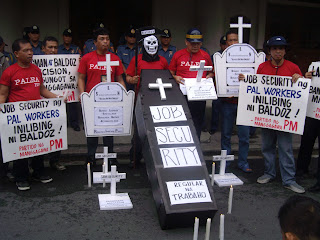 The labor row at Philippine Airlines (PAL) flares up once more at the start of the airline peak season with its workers starting today a series of protest actions against the recent decision of Labor Secretary Rosalinda Baldoz to allow the mass layoff of some 3,000 workers. At 10:00 a.m. today dozens of members of the Philippine Airlines Employees’ Association (PALEA), the ground crew union at PAL, held a symbolic protest at the main office of the Department of Labor and Employement (DOLE) in Intramuros, Manila.

Gerry Rivera, PALEA president and also vice chair of the militant Partido ng Manggagawa (PM), stated that “The DOLE’s version of Oplan Kaluluwa is releasing an order on the eve of the Halloween holidays that revives the half dead proposal to permit contractualization at PAL. Contractualization means not just the death of job security at PAL but also kill the oldest union in the country.”

“Nobody will also themselves to be murdered without putting up a fight. This is a fight for decent jobs and protection for our families,” Rivera added. Tomorrow the protests continue with a march from the DOLE main office to Mendiola by several hundred PAL employees together with supporters from PM and other labor groups.

Rivera lambasted PAL’s argument that it will close down if the layoff and outsourcing move is not allowed. “This is simply blackmail and black propaganda meant to intimidate workers into accepting the unacceptable. Revenue generating departments such as airport services and catering will be outsourced to service providers which are partly-owned by Lucio Tan. PAL may be losing but the second wealthiest Filipino keeps on getting richer,” he argued.

He called on PAL workers to reject the termination notices that will come in the wake of the DOLE decision affirming the mass layoff plan. “PALEA calls on its members not to accept any termination paper and not to sign any employment contract with service providers. All for one and one for all in the fight for job security and union security,” he explained.

Rivera recalled that when the mass retrenchment was initially implemented last April, employees were asked to sign termination papers in one room and then to transfer to another room to sign employment contracts with service providers. “Let us not be tricked into swallowing the bitter pill of retrenchment now that it has been artificially sweetened with a slightly higher separation pay,” he insisted.
Posted by Juan Manggagawa at 7:57:00 AM

Magnificent beat ! I wish to apprentice while
you amend your website, how could i subscribe for a weblog site?
The account aided me a applicable deal. I were
a little bit acquainted of this your broadcast offered shiny clear concept
Visit my web-site : GFI Norte