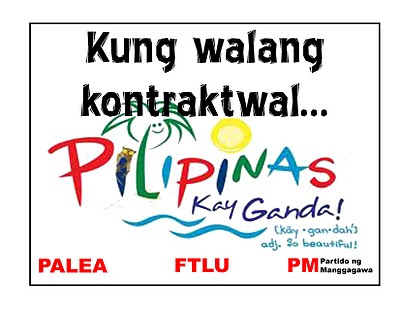 “The ‘Pilipinas Kay Ganda’ brand may not be appealing to many but we believe it describes our dream of a country where workers enjoy job security, living wages, substantial benefits, decent working conditions and the freedom to have a voice and representation in the workplace through a union,” stated Renato Magtubo, PM chairperson. PM will also make streamers with the message “Kontraktwalisasyon, WOW Mali” as a play on the old tourism slogan “WOW Philippines.”

The various labor groups that have come together to denounce the decision of Labor Secretary Rosalinda Baldoz on the mass layoff at Philippine Airlines (PAL), will hold the nationwide protest to push for government regulation against contractualization. The Philippine Airlines Employees’ Association (PALEA) and the union at the Fortune Tobacco Corporation (FTC), another Lucio Tan company, will lead the main activity at Ayala Ave. in Makati. Aside from PM, big labor groups that have confirmed attendance in the march along Ayala Ave. include the Trade Union Congress of the Philippines, Koalisyon Kontra Kontraktwalisasyon (KONTRA), Labor Alliance for Better Order and Reform (LABOR), and the Church-Labor Conference (CLC).

“This is now a fight that is beyond PAL. In factories, shops, offices and malls contractual workers are working side-by-side with regular employees in doing the same job for lesser pay and worse working conditions. We demand that government institute reforms to enhance job security and stop contractualization schemes,” argued Gerry Rivera, PALEA president and PM vice chairperson.

Participating in the Ayala march are FTC union members who are restive over another corporate restructuring which threatens the job security of its more than 2,000 workers. At 6:00 p.m. tonight hundreds of Fortune Tobacco Labor Union (FTLU) members will hold a prayer rally outside the factory gates in Parang, Marikina City. Last November 12 some 500 FTLU members held a torch parade from Parang to Concepcion.

February this year FTC and Philip Morris Philippines, Inc. announced the formation of the joint venture company Philip Morris Fortune Tobacco Corporation (PMFTC). FTC has told the union that it will offer early retirement to some 1,000 workers then forcibly terminate another 2,000 workers before being rehired in the merged PMFTC. The union is demanding that PMFTC absorb the FTC workers without loss of employment status and recognize the union and its existing collective bargaining agreement.

Aside from the Ayala march, rallies will also be held in other key cities like Davao, General Santos and Bacolod on November 25. In Cebu City the mass action will be held a day earlier with a labor forum at the ALU Building in the morning and then an afternoon rally at the local Department of Labor and Employment (DOLE) office.
Posted by Juan Manggagawa at 12:16:00 PM

Unemployed Pinoys can earn while enjoying time with their family and loveones.
Unemployed is Brave and a choice to be a Freeman.
Join us today at http://www.unemployedpinoys.com