Ghost of Martial Law continues to haunt the nation

On the 35th anniversary of the declaration of martial law, the ghost of authoritarianism has not been exorcised and continues to haunt the country. It seems that the more things change, the more they stay the same. Then Ferdinand Marcos had his PD 1081 and the ASSO (Arrest Search and Seizure Order). Now Gloria Arroyo has her E0 464 and the HSA (Human Security Act). All serve to restrict the civil liberties and trample upon the democratic rights of the people. 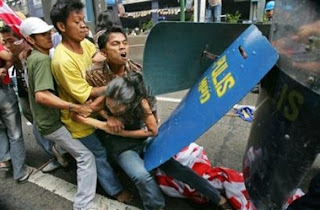 Even the cast of principal characters looks like a rerun of the old. Then the was Ferdinand Marcos and the First Lady Imelda forming the conjugal dictatorship. Now there is Gloria Arroyo and the First Gentleman Mike plundering the nation's coffers. With Mike Arroyo exposed as the mystery man, the lady in Malacanang cannot be too far behind. In fact, Gloria Arroyo graced the signing of the ZTE deal in China herself which makes her the godmother of the anomalous contract.
Gloria and Mike's partnership in plundering the people's money forms a consistent thread in past six years. The overpriced ZTE broadband deal worth P15 billion is just the latest in a series of anomalies. In the heady first days after Edsa Dos, Nani Perez served as the new president's bagman for the bribe money from IMPSA. After which came the scandal of the Diosdado Macapagal highway and the fertilizer scam in 2004.

The theft of the nation's coffers go hand in hand with the theft of the people's liberties. Civil liberties must be restricted in order to hide the plunder perpetrated by the couple in Malacanang.
Gloria Arroyo is already the longest serving president or resident of Malacanang since Ferdinand Marcos. And if charter change is succesfully pulled off sometime in the next three years, she may even get to go beyond her constitutional term limit in 2010. In 1972, Ferdinand Marcos built the dictatorship upon the illusion of constitutional authoritarianism. In 2010, Gloria Arroyo may consolidate her dictatorship upon the gimmick of charter change. ###
Posted by Partido ng Manggagawa at 1:00:00 AM 1 comment: