The labor group Partido Manggagawa (PM) slammed employers for its “wholesale opposition” to bills that seek to regulate or prohibit the prevalent forms of contractualization. “It’s social justice, stupid,” exclaimed Rene Magtubo, PM national chair, in response to the employers’ stand that businesses are entitled to profit and growth.

He added that “The blanket rejection by capitalists of proposed bills promoting workers’ security of tenure reeks of utter greed. The Philippines has had years of robust economic growth yet the employers do not want to share the fruits of workers’ labor. No wonder, capitalists are getting richer as workers are getting poorer.”

PM and other labor groups are escalating their campaign and advocacy against endo. The passage of the security of tenure bill and the release of a Presidential executive order on endo are both objectives of the workers’ campaign.

A copy of the Employers Confederation of the Philippines’ (ECOP) position paper on endo bills filed in the House of Representatives was released to the media yesterday. The ECOP sought to block passage of all the 25 proposed legislation to reform the Labor Code’s provisions on contracting.

The Labor Code allows contractualization subject to the power of the Labor Secretary to regulate or prohibit it in the interest of workers’ constitutional right to security of tenure. PM and its allied labor groups in the coalition Nagkaisa! are supporting HB 4444 by Cong. Raymond Mendoza. The bill aims to strengthen job security by banning all forms of contractualization.

“In the ECOP’s twisted logic, capitalist profit is an entitlement superior to labor rights such as job security. From such a hardline position flows the widespread practice of illegal forms of contractualization like 5-5-5 and repeated short-term contracts,” averred Magtubo.

He continued that “The ECOP did not even bother to assess the strengths and weaknesses of the different pending bills on endo. The capitalists simply do not want to any kind of change that will cut into their profit. They just want the business as usual of insecure jobs for workers so that wages remain cheap, benefits lacking and labor docile.”

The PM and Nagkaisa! are calling on President Rodrigo Duterte to issue an executive order to implement his promise of ending endo. In a dialogue last Labor Day, Duterte conceded to the demand. Last May 9, a draft order was submitted by Nagkaisa!, KMU and National Anti-Poverty Commission to the President.

“We call on the President to sign the draft executive order. Promises should be kept not broken. Workers are expecting no less from Malacanang,” insisted Magtubo. 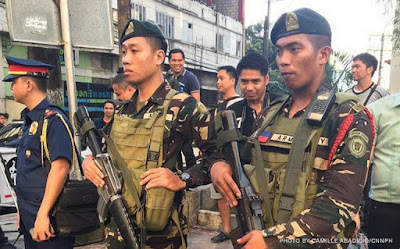 The militant group Partido Manggagawa (PM) today expressed opposition to the imposition of martial law in Mindanao in the wake of armed confrontations between the Armed Forces of the Philippines and the so-called Maute group in Marawi City.

“Martial law in Mindanao is a disproportionate response to a localized problem. It is like using a gun to kill a fly when a swatter will suffice. The lessons of Philippine history is that martial rule is a problem not a solution as it leads to abuses and dictatorship,” stated Rene Magtubo, PM national chair.

He added that martial law will affect the exercise of civil liberties and labor rights in Mindanao. “There have been several labor strikes in Mindanao since last year and also workers’ protest actions against contractualization. Under martial law, the military can be called to suppress such legitimate acts of redress workers’ grievances. It certainly won’t be the first time such happens,” Magtubo insisted.

PM also called on Congress to revoke the declaration of martial in exercise its prerogatives to review the presidential order. The group has learned that the Congress leadership has informed solons to be on standby up to Friday. According to safeguards embedded in the Constitution, Congress has to affirm any declaration of martial law and may revoke it after 48 hours.

He argued that “We just hope that President Duterte’s Moscow declaration of martial law has not been unduly influenced by the alleged charisma of Putin who has been widely criticized for erecting constitutional authoritarianism in Russia.”

The fight for regular jobs, other rights continues 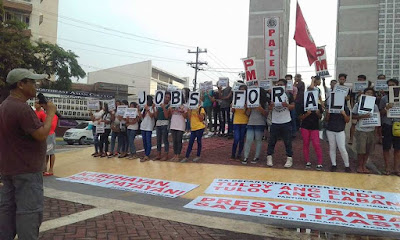 Today is the first Labor Day celebration under the administration of President Rodrigo Roa Duterte (PRRD).  Indeed, a quick year had passed when, few days before the Labor Day 2016 celebrations, all presidential candidates, including PRRD, swore before the entire nation to liberate the working class from the endemic problems of contractualization and low wages.

On contractualization, the PRRD vowed to put an end to the despicable practice of agency-hiring.  On wages, he promised the abolition of provincial rate system which for decades, created inequity and wide disparities in wages between regions and provinces of the country.

Workers had long been fighting for ultimate deliverance from precarious working conditions that made them poor and exploited.  Electing a President who pledges to end the problem of contractualization and low wages was therefore a welcome development to many workers. As such, labor organizations under Nagkaisa labor coalition have been very cooperative with the administration in making it sure that the President’s promises are fulfilled.

We actively participated in all the workshops, meetings, summits, and Congressional hearings organized by the government to make sure that the interest and specific concerns of the working class on the issue of endo and other rights are recognized and properly addressed by official bodies.  We also held countless conferences, consultations and mass actions to demand attention to our grievances.  We did all these because we want all forms of contractualization prohibited both in the private and public sector.  We even actively sought an audience with the President when we felt betrayed by the labor department on the issue of contractualization.

Now the hard questions: Did workers get what they deserve from this level of engagement with the government?  Did contractualization end upon the issuance of Department Order (D.O.) 174?  Are other labor and human rights more protected now under the new administration?

We in Nagkaisa had already expressed our rejection of D.O. 174.  Our demand today is for the President to draw up an Executive Order in line with the workers’ demand for total prohibition of agency-hiring and fixed-term employment and also, to certify as an urgent administration measure HB4444 (Mendoza, TUCP-PL) and HB 556 (Bayan Muna, Anakpawis) which seek the same.

Furthermore, the government has to finally resolve the long-running dispute on outsourcing between the Philippine Airlines (PAL) and the PAL Employees Association (PALEA) to prove the government’s decisiveness in addressing labor rights violations in giant and powerful companies.

On the wage issue, the government should now consider granting workers substantial wage hikes in the face of mounting prices of basic commodities.  At the same time, the proposed tripartite commission to review and revise the existing guidelines and rules on wage-setting should be formed immediately.

Related to the issue of prices is our demand for the government to adopt new policy measures in addressing the high cost of power and the monopolization of the power industry.

There are several other labor rights issues that were brought out during the February 27, 2017 dialogue with the President. These include:

§  the immediate ratification of ILO Convention 151 which empowers the public sector workers to organize their own associations and unions;
§  subjecting the appointment of genuine worker representation in tripartite bodies of government and GOCCs to annual official review;
§  the deputization of trade unions as Labor Law Compliance Inspectors;
§  prohibiting the collection of recruitment fees to OFWs and a ban on sending domestic workers to the Middle East, until their rights and welfare are assured once they get deployed;
§  the holding of quarterly dialogues with the Labor Sector;

And lastly, Nagkaisa has already expressed alarm that some members undertaking legitimate trade union work may have been killed or arrested on trumped up charges under the cloak of the drug war.

These agenda remain pending before the Office of the President and other concerned government agencies.  Unfortunately the failure to stamp out the problem of contractualization during the last ten months gave this administration a bad mark.  And unless this failure is rectified by corrective measures and affirmative actions in relation to other labor rights demands, a slide into further isolation from the working class population is a serious problem that will hound this administration in days to come.

Today, thousands of workers, youth and women from our member-organizations will be marching along the streets of Espana and Mendiola in Manila as well as in other major cities of the country like Cebu, Bacolod and Davao. Later today, leaders of Nagkaisa will be meeting with PRRD in Davao City to pursue those concerns and to demand accountability from those entrusted to resolve issues in favor of workers.

We will never back down in pressing for these demands through collective negotiations and mass actions.  We have regular jobs and security of tenure to win. And we have other labor and human rights to reclaim!