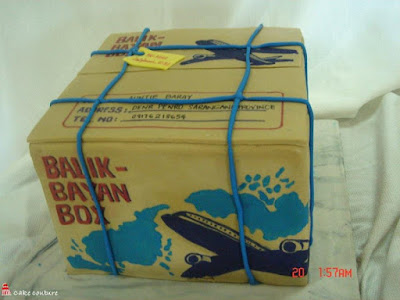 Labor group Partido Manggagawa (PM) joined OFW groups and individuals around the world in denouncing the new policy of Bureau of Customs (BoC) to subject balikbayan boxes to inspection and to impose duties on their assessed values exceeding $500.

“The policy is anti-OFWs on two grounds. First, it begins with the sweeping assumption that OFWs are into technical smuggling. Second, it ends up with a new revenue scheme that can generate some P600 million/year from small articles being sent home by our OFWs,” said PM Chair Renato Magtubo.

Partido Manggagawa is asking the BoC and Malacanang to scrap the twin policy altogether as they smack with a veiled intention of making money out of the small and non-business articles coming from our OFWs.

But Magtubo said, “Stricter rules must be imposed against illicit trade, including imported goods that are meant for business and not against compressed articles that contain hard labor and deep love coming from our OFWs.”

He pointed out that this reform is also aimed at the wrong target since smuggled business articles are usually found in 40 ft.-long container vans and not in 4-cubic foot balikbayan boxes.

On the planned imposition of duties against articles exceeding $500 in value, Magtubo said the policy can be used arbitrarily and indiscriminately against OFWs who are unaware of custom’s valuation as well as the procedures on how values are determined on a mix of articles that are compressed inside the balikbayan boxes.

The labor group lamented the fact that OFWs have already been paying $0.05 cents per dollar in their remittances thus the new policy will be an added burden to them.

He also agreed with the view that the new policy may only create new forms of corruption in the most corrupt agency at the expense of hardworking OFWs.
Posted by Juan Manggagawa at 7:28:00 AM No comments: 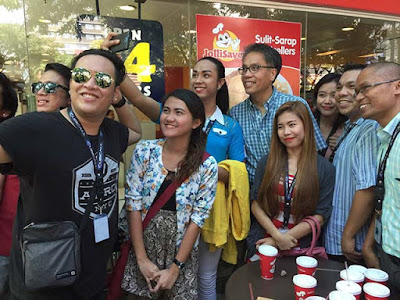 A BPO workers group today challenged presidential candidates to commit to a platform of demands and issues of employees in the sector. The challenge came a day after news came out on an hour-long meeting that Mar Roxas had with some BPO workers in .

“We hope that candidates Mar Roxas, Jojo Binay and Grace Poe, even if she had not yet announced formally, will seriously engage with BPO workers on their demands and not be content with shallow photo-ops. And the dialogue with BPO workers should lead to a firm commitment to concrete policy and executive actions, rather than end in vague promises that will be easily forgotten once the elections are over,” argued Rosie Hong, Inter-Call Center Association of Workers (ICCAW) president.

ICCAW is one of only a few workers associations in the BPO industry. It was founded in in late 2012 as a result of the fight of workers of Direct Access, a call center that unceremoniously shutdown and left its 600 employees without jobs and with unpaid wages and benefits. ICCAW has since expanded nationwide with organizing groups in Metro Manila, and . With a full-pledged chapter in Cebu, ICCAW sits as the labor representative in the tripartite body on the ICT industry.

“A case in point is candidate Mar’s ‘charm offensive’ with BPO workers in ’s IT Park. He was very concrete in promising a ‘caravan’ of government offices for faster processing of work-related requirements but in contrast he was obviously ambiguous and non-committal on the issue of workers security of tenure,” Hong elaborated.

“Security of tenure is not contradictory to the volatile nature of outsourced accounts. Contracts with overseas clients may come and go but the BPO company remains so it cannot deny security of tenure to its employees whose skills are portable and usable to different accounts,” Hong insisted.

Among ICCAW’s platform is the demand for industry-wide standards for wages, benefits and entitlements that must be well above the minimum mandated by law and commensurate to profitable dollar-earning nature of the BPO industry. ICCAW seeks to be an industry-wide organization for employees in the call center and business process outsourcing sector, and be a voice for industry workers’ concerns, grievances, demands and interests.

Hong ended with “Instead of a charm offensive and photo-ops, we prefer to engage with candidates on a policy debate and issue discussions. For example, we are interested to hear if any of them believe that contractualization is good for the BPO sector and we are more than willing to discourse with them on such issues.”
Posted by Juan Manggagawa at 10:43:00 AM No comments: 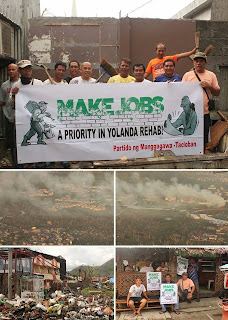 Informal workers associations in are asking the government to engage with people’s organizations in the implementation of the Yolanda rehabilitation in the face of criticism of the pace and scale of work done.

“The delay in the release of funds for the Yolanda rehab is just part of the problem. The participation of the people themselves is vital in the success of the Yolanda rehab plan. Yolanda survivors should not just be passive recipients of aid but active stakeholders in the reconstruction process,” asserted Judy Torres, chair of the tricycle federation (TAFEMDO) and coordinator of Partido Manggagawa (PM) in Region 8.

Torres averred that “People’s organizations can also serve as watchdogs against graft and corruption in the rehab process. Even more than the problem of temporary shelter, the input of the people is crucial in the issue of permanent housing. We insist on in-city relocation and climate-resilient socialized housing program for informal settlers.”

PM and TAFEMDO had earlier criticized the overpriced and substandard bunkhouses when it was exposed in 2014. For two years, the groups have been campaigning for decent employment, social protection and people’s participation as pillars of Yolanda rehabilitation plan.

In December of 2013 TAFEMDO held in Tacloban a motorcade of a hundred tricycles which were garbed in tarp posters with the message “Make jobs a priority in Yolanda rehab.” Last year, the Tacloban tricycle federation together with drivers associations in Hilongos and Baybay, issued a manifesto calling for decent employment to be a priority in the rehab plan. It also held a motorcade

The demand echoes reports by the United Nations and the International Labor Organization that more need to be done to provide decent work in the Yolanda affected areas that includes ensuring minimum wages, sound occupational safety, skills development and social protection.


“Decent jobs are a necessity since it is a guarantee to a person’s long-term security and a life of dignity” Torres argued.
Posted by Juan Manggagawa at 2:39:00 PM No comments: