The group Partido Manggagawa slammed the meddling of management in a union election held yesterday at the garments factory Dong Seung Inc. in the Cavite Economic Zone.

Slain labor organizer Dennis Sequena had assisted workers of Dong Seung in organizing a union. Sequena was killed last June 2 in Tanza, Cavite while conducting a labor rights seminar for workers in the Cavite ecozone.

PM called on Labor Secretary Silvestre Bello to guarantee the sanctity of union elections and promote freedom of association in the ecozones in view of such gross violations and management interference.  Another certification election is being held today at another garments factory in the Cavite ecozone. Magtubo reminded the DOLE that the country has again been cited at the International Labor Organization annual conference this month for complaints of violations of freedom of association and collective bargaining.

“Meddling by the company lawyer of Dong Seung started well before the actual certification election. During the pre-election proceedings, the company lawyer opposed the participation of any legal counsels except for the employer. The employer was given the privilege of pollwatchers in violation of the bystander rule,” Magtubo averred.

He added that “The company lawyer demanded that two union officers can only be allowed to vote if they undermine their pending case at the National Labor Relations Commission by declaring that their complaint is not true. Is this not a clear case of blackmail? He also pushed for the inclusion of 112 voters in violation of the rule providing that employees regularized after the three-months prior are excluded. The company lawyer finally insisted that campaigning and distribution of sample ballots are prohibited!”

“Unfortunately the election officer from the DOLE provincial office—in a clear act of omission—allowed all of this flagrant management interference despite his power to administer the conduct of the certification election. The rules provide that management is only a bystander in a union election since workers’ have freedom of association. Workers do not interfere when investors and stockholders vote for the company board of directors. So why should employers meddle in elections among workers?,” Magtubo explained. 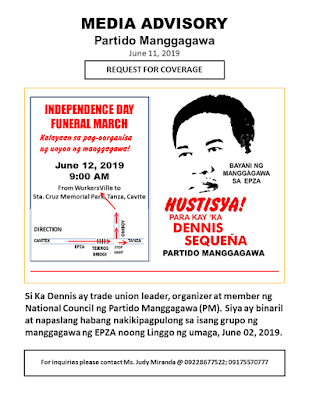 Slain Cavite union organizer, Dennis Sequena, is to be buried tomorrow with his family and colleagues holding a funeral and protest march. International and local labor and human rights groups have called on government for action on his killing.

Sequena, vice chair of the Cavite chapter of Partido Manggagawa (PM) and also a partylist nominee of the group in the last elections, was shot and killed last June 2 while meeting a group of workers.

The funeral march will start tomorrow 9:00 am from the community of Workersville in Brgy. Punta, Tanza where he was killed and end in the Sta. Cruz Memorial Park in the same town. Last Sunday, scores of worker activists and community leaders attended a tribute to Sequena where he was honored as a “hero of epza workers.”

The International Trade Union Confederation representing 207 million workers in 163 countries has formally sent a letter to Bello and asked him to convene the National Tripartite Industrial Peace Council to investigate the fatal shooting of Sequena. The Business and Human Rights Resource Center and the International Labor Rights Forum also issued statements condemning the killing of Sequena. The two international labor rights both worked with Sequena on issues workers rights of workers in the Cavite ecozone.

The BHRRC statement can be accessed here: https://www.business-humanrights.org/en/business-human-rights-resource-centre-condemns-the-killing-of-filipino-labour-leader-dennis-seque%C3%B1a

THE ITUC letter can be accessed here: https://www.ituc-csi.org/IMG/pdf/ituc_letter_to_dole_on_leonides_dennis_sequena.pdf.

Photos of the tribute to Sequena can be accessed here: https://www.facebook.com/partidomanggagawa/posts/10157187408269323?__xts__[0]=68.ARAse6d1ymGJdc2i7_QnNY7PiMHoy_2-VP-YWBmbjkOtXuIa1pFmXdt0Yw3WYE83v8GlevF5-NhxMk2bH9gEPwu5N8iu1j1RWOGdtfYU-Fi_GMc6kjWZ0-9RimVMyleMiuP8CPSPwdha2NGQLHhmxWv2FwaHLSvZK9xGTfCvDubeyxmLB9jlxs0N_dR_SmsBQ_xOF6GDQXk_Cw2Ez8BZn3uQNhY_VHY7zekIUWgFxswAVNH-vPnSGRmzO1aBk0TN4wvkvZBBeY_Mhp8o2NThrhWJKD6mWssgw_nEr8ZdafeDYG75pUSbc2JdJorCIXAW2tqNysGy8uYCP669p6Jc&__tn__=-R 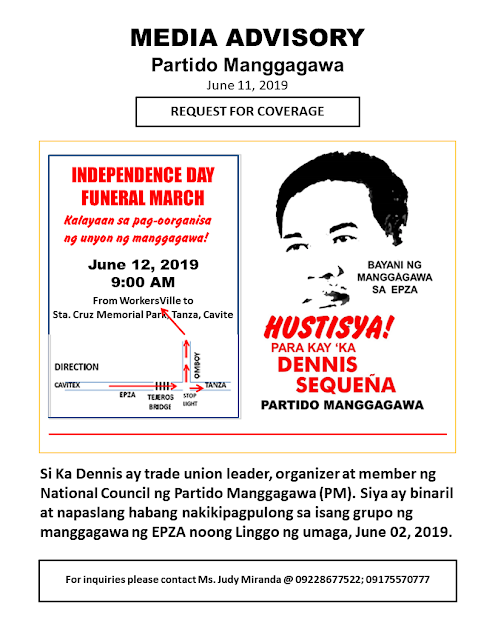 
International and local labor groups are asking Labor Secretary Silvestre Bello for action on the killings of labor leaders after the fatal shooting of a union organizer in Cavite during a meeting of workers.

“We deplore the ongoing violence and assassinations targeting labour and human rights defenders in the Philippines. Extrajudicial killings must be stopped and the environment of impunity must come to an end. It is the responsibility of the government of the Philippines to ensure that the lives and personal security of workers and activists must be guaranteed and that they are able to exercise their basic rights without threats and fear,” stated Sharan Burrow, General Secretary of the International Trade Union Confederation (ITUC). The ITUC represents 207 million workers in 163 countries.

The ITUC letter to Labor Secretary Silvestre Bello arose from the fatal shooting of Dennis Sequena, provincial leader of the Partido Manggagawa (PM) in Cavite, while meeting a group of ecozone workers last June 2.

The labor coalition Nagkaisa earlier called on the Department of Labor and Employment for urgent response on the death of Sequena.

“We demand action from Secretary Bello to stop the series of extra-judicial killings of labor activists and trade unionists. As Labor Secretary, he must raise a voice against these killings. And we ask him to immediately convene the National Tripartite Monitoring Body (NTMB) which has the mandate to probe labor-related EJK’s,” stated Rene Magtubo, PM national chair.

The NTMB was formed in response to the recommendation of the International Labor Organization High Level Mission (ILO HLM) in 2009 to investigate violations of the freedom of association and killings of trade unionists.

Yesterday, scores of workers attended a tribute to Sequena at his wake in Workersville, Tanza, Cavite. He was honored a “hero of epza workers.” Epza is the popular term for the Cavite Economic Zone in Rosario which is the largest export processing area in the country.

Sequena is to be buried on the morning of June 12. Hundreds are expected to participate in the funeral march which will also be a protest to seek justice for his killing.

THE ITUC letter can be accessed here: https://www.ituc-csi.org/IMG/pdf/ituc_letter_to_dole_on_leonides_dennis_sequena.pdf.
Photos of the tribute to Sequena can be accessed here: https://www.facebook.com/partidomanggagawa/posts/10157187408269323?__xts__[0]=68.ARAse6d1ymGJdc2i7_QnNY7PiMHoy_2-VP-YWBmbjkOtXuIa1pFmXdt0Yw3WYE83v8GlevF5-NhxMk2bH9gEPwu5N8iu1j1RWOGdtfYU-Fi_GMc6kjWZ0-9RimVMyleMiuP8CPSPwdha2NGQLHhmxWv2FwaHLSvZK9xGTfCvDubeyxmLB9jlxs0N_dR_SmsBQ_xOF6GDQXk_Cw2Ez8BZn3uQNhY_VHY7zekIUWgFxswAVNH-vPnSGRmzO1aBk0TN4wvkvZBBeY_Mhp8o2NThrhWJKD6mWssgw_nEr8ZdafeDYG75pUSbc2JdJorCIXAW2tqNysGy8uYCP669p6Jc&__tn__=-R 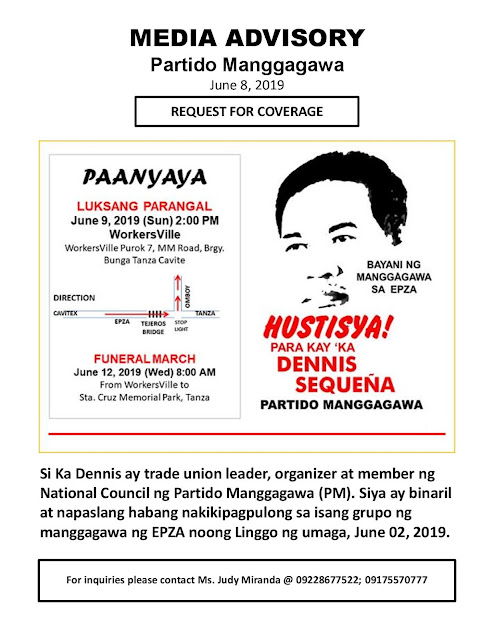 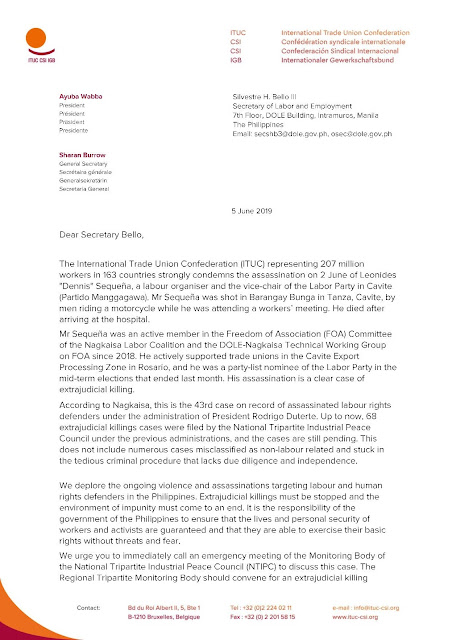 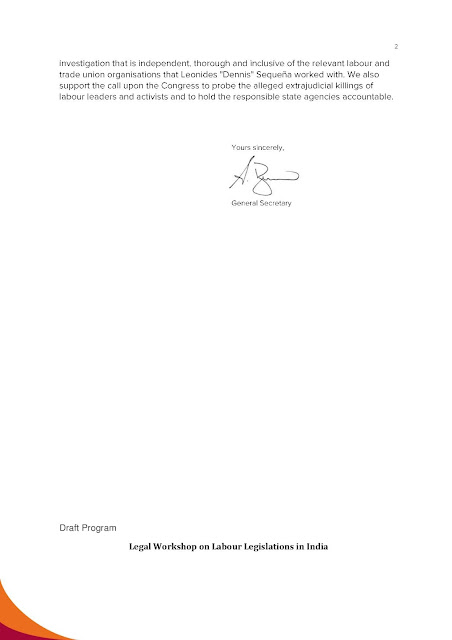 Group calls on Bello to act on killings of labor leaders

The group Partido Manggagawa (PM) called on Labor Secretary Silvestre Bello for action on the continued killings of labor leaders a day after the fatal shooting of a union organizer in Cavite during a meeting of workers.

“We demand action from Secretary Bello to stop the series of extra-judicial killings of labor activists and trade unionists. As Labor Secretary, he must raise a voice against these killings. And we ask him to immediately convene the National Tripartite Monitoring Body (NTMB) which has the mandate to probe labor-related EJK’s,” stated Rene Magtubo, PM national chair.

The labor coalition Nagkaisa has likewise called on the Department of Labor and Employment for urgent response on the death of Sequena. The NTMB was formed in response to the recommendation of the International Labor Organization High Level Mission (ILO HLM) in 2009 to investigate violations of the freedom of association and killings of trade unionists.

“The shooting of Dennis while he was conducting a labor rights seminar is a particular blatant act of violence against workers exercising their freedom of association. This should not be happening 10 years after the ILO HLM,” Magtubo insisted.

Sequena is a National Council member of PM and vice chair of its provincial chapter in Cavite. He is the second PM labor activist killed since 2016. Orlando Abangan, PM-Cebu leader and informal worker organizer of the labor center Sentro, was shot and killed in September 2016.

Earlier, Victoriano Embang, president of the sugar workers association of Hacienda Maria Cecilia, Isabela in Negros Occidental was shot and killed in December 2012. Rolando Pango, a farm worker leader in Binalbagan, Negros Occidental was ambushed in November 2014. Both Embang and Pango were PM leaders involved in helping workers embroiled in labor and agrarian disputes.

The International Trade Union Confederation (ITUC) named the Philippines as one among the worst countries in 2018 for trade unionists due to systematic violations of labor rights and the continued killings of worker leaders.

Press Conference:
People of Mariveles, Bataan Against Senate Bill 2133: An Act Amending and Expanding the Charter of the Freeport Area of Bataan (FAB)

Various groups and local government officials of Mariveles Bataan will converge and hold a press conference to denounce the railroaded Senate Bill 2133, which already passed the Bicameral Committee last week without consultation with the people involved. This Bill, if passed into law, will give the Authority of the Freeport Area of Bataan (AFAB) summary demolition powers, removes the residential character of the FAB, and expands its territory to include several baranggays of Mariveles, among others. The people of Mariveles strongly condems these anti-people policies contained in the enrolled bill, and would like to ask President Duterte to veto it.

Your presence in this press conference is highly requested. Thank you. ###
Posted by Juan Manggagawa at 3:46:00 PM No comments:


The labor group Partido Manggagawa (PM) condemned the killing of the vice chairperson of its Cavite chapter. The group called on the authorities to investigate and solve the killing.

Dennis Sequena was shot and killed earlier today in Brgy. Bunga, Tanza, Cavite while meeting a group of workers. He was shot by a gunman who arrived riding in tandem on a motorcycle. The gunman and his accomplice escaped using the same motorcycle. Sequena was brought by his PM colleagues to the General Trias Maternity and Pediatric Hospital but doctors failed to revive him.

“We call on the police to act with dispatch and catch the perpetrators of the crime. Dennis is a community leader and has no personal enemies. We believe this is an extra-judicial killing for Dennis’ work as a labor organizer,” stated Rene Magtubo, PM national chair.

Sequena was a union organizer and partylist nominee of the group in the just concluded elections. He was active in assisting Cavite workers facing labor problems and advising workers who are unionizing as a means to improve wages and working conditions.

Magtubo also called on Congress to launch a congressional investigation on the extra-judicial killing of labor organizers and union activists.