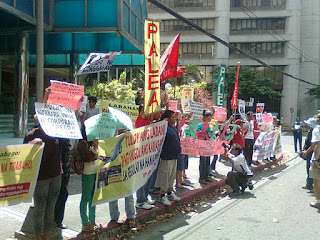 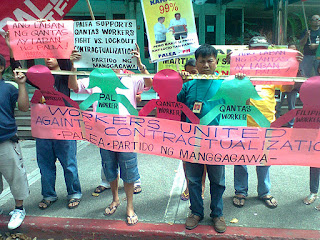 The Philippine Airlines Employees’ Association (PALEA) and Partido ng Manggagawa (PM) picketed the Qantas office and Australian embassy in a show of solidarity for the embattled workers of the Australian flag carrier. “We extend the hand of solidarity to our brothers and sisters who are for fighting for job security, decent pay and better working conditions. The struggles they are waging mirror the same demands that we are currently fighting for at PAL,” declared Gerry Rivera, PALEA president and PM vice chair.

Some 50 members of PALEA and PM held picketed the Qantas office at a building in Paseo de Roxas in , by 11:00 a.m. After holding a short program and chanting slogans in support of Qantas workers, the group then proceeded to the Australian embassy in the along

“Ang laban ng Qantas ay laban ng PALEA. We are all Qantas workers,” the protesters shouted. Rivera explained that “PALEA condemns the drive by Qantas to slash labor costs, undercut labor standards and weaken job security, all in the name of competitiveness. This is a mere myth as Qantas top management has taken salary hikes while forcing sacrifices on workers.”

Meanwhile PALEA dismissed a PAL announcement that it is readying charges against people who blocked a catering truck from leaving the In-Flight Center (IFC). “It is PAL’s habit to threaten its workers in a futile effort at intimidation. They threatened administrative cases against employees for joining mass actions and they said they will file an illegal strike charge but none come of it. But this time, the threat is also a means for PAL to divert attention from its culpability in the violent daybreak attack on the PALEA protest camp which led to the death of one bystander and injuries to seven of our members. PAL’s best defense is offense,” Rivera insisted.

He added that “PAL could only invent the lamest excuse—that PALEA foisted the attack on its own campout. Unfortunately for PAL and its outsourced goons-provider, one of the attackers was caught and gave some damning admission. But the bigger question that people should ask is this: Why does PAL want the IFC to operate when it has declared that the airport services, call center reservations and catering departments have been closed? If Sky Kitchen and Sky Logistics need the IFC then these are illegal labor-only contractors not independent service providers.”

PALEA and PM also criticized the Australian labor court called Fair Work Australia (FWA) for “surrendering to the lockout blackmail of Qantas CEO Alan Joyce.” In a ruling, the FWA lifted the lockout but also stopped strikes by the three Qantas unions. “Workers now have 21 days within which to negotiate with the hardline Qantas management without the leverage of strike action. In the face of intransigence by Qantas, only industrial action can force employers to heed the demands of workers,” Rivera argued.

The Qantas union Australian Licenced Aircraft Engineers Association (ALAEA) had expressed solidarity for PALEA after some 2,400 its members were retrenched as part of a controversial outsourcing scheme that has been slammed as “a bid to demolish job security and also bust the union.”
Posted by Juan Manggagawa at 11:34:00 AM