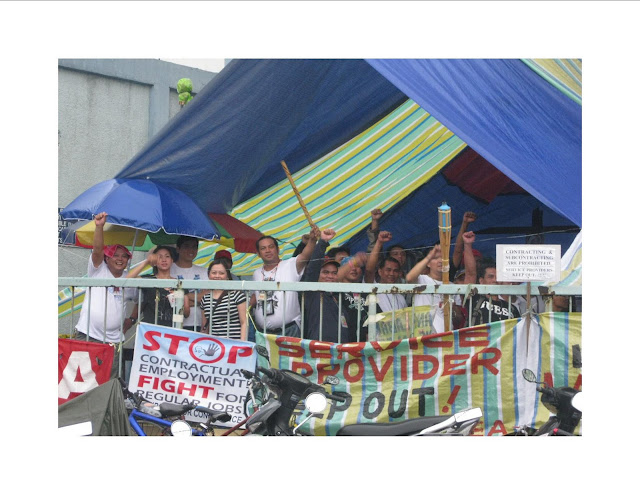 The result of the hearing however was apparently lost on a sheriff who came today to the protest camp accompanied by PNP personnel to remind PALEA of the 72-hour temporary restraining order handed down last Monday by another Pasay RTC Judge Edwin Ramizo. No untoward incident transpired as PALEA members apprised the sheriff and the police of the latest developments.

In the hearing at Branch 108 of the Pasay RTC, the six PALEA members moved that the case be dismissed since it involves a labor dispute and as per provisions of the Labor Code is not under the jurisdiction of the civil courts. Tomorrow the parties were asked by Judge Ragaza to submit their position papers and a final decision is expected on Friday.

“In arguing its case against PALEA’s campout, PAL is contradicting itself. PAL says that the 2,400 PALEA members cannot be accepted back to work since the airport services, in-flight catering and call center reservations departments have been closed and outsourced. So how come PAL alleges that the IFC which houses the catering department is essential to its operations. This raises the suspicions that it will allow Sky Kitchen, a supposed separate entity that at present provides substandard catering service according to reports reaching PALEA, access to the facilities of the IFC,” Rivera insisted.

PALEA had declared that it will not abandon the protest camp despite threats from PAL to have it dismantled. The union has also announced that the campout is part of the global movement against corporate greed and corruption inspired by the Occupy Wall Street protests.

Last Monday PALEA and North Triangle residents who are demanding on-site housing and fighting eviction by an Ayala property development firm joined forces in a symbolic occupation of Roxas Boulevard. They were supported by running priest Fr. Robert Reyes and the Freedom from Debt Coalition which has started a campaign to boycott PAL and Air .
Posted by Juan Manggagawa at 2:52:00 PM