PALEA readying own charges vs. attackers 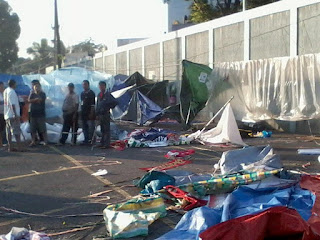 The Philippine Airlines Employees’ Association (PALEA) declared that they are readying their own charges against those responsible for the daybreak attack on its protest camp even as it dismissed a Philippine Airlines (PAL) announcement that it will file complaints against union members. “PAL is trying to divert attention from its culpability in the violent daybreak attack on the PALEA protest camp which led to the death of one bystander and injuries to seven of our members. Apparently PAL’s best defense is offense,” insisted Gerry Rivera, PALEA president and vice chair of Partido ng Manggagawa.

A criminal complaint had already been filed against a certain Johnny dela Cruz, one the alleged hired goons who was apprehended by PALEA members during the attack. PALEA is now consulting with its lawyers on another case against the purported mastermind of the attack. Dela Cruz had signed a sworn statement to the police that he was paid together with others to dismantle PALEA’s campout.

PALEA also reacted to Malacanang’s call for sobriety. “It is not comforting words but swift action that will resolve the labor row. Workers are getting killed and hurt while PNoy turns a blind eye to the escalating violence foisted on PALEA. Contrast this administration’s inaction to the Australian government’s swift intervention in the Qantas lockout.”

News reports quoted PAL as saying that it is readying charges against people who blocked a catering truck from leaving the In-Flight Center (IFC). “It is PAL’s habit to threaten its workers in a futile effort at intimidation. They threatened administrative cases against employees for joining mass actions and they said they will file an illegal strike charge but none come of it,” Rivera added.

He added that “PAL could only invent the lamest excuse—that PALEA foisted the attack on its own campout. Unfortunately for PAL and its outsourced goons-provider, one of the attackers was caught and gave some damning admission. But the bigger question that people should ask is this: Why does PAL want the IFC to operate when it has declared that the airport services, call center reservations and catering departments have been closed? If Sky Kitchen and Sky Logistics need the IFC then these are illegal labor-only contractors not independent service providers.”

Meanwhile PALEA members sacrificed the traditional visit to deceased family members and instead guarded the campout which has been the subject of two failed dispersal attempts. Today they lighted candles and made a makeshift coffin to symbolize the continuing protests against outsourcing and contractualization at PAL and the rest of the world.

Tomorrow PALEA will embark on a three-day “Lakbay-Hustisya” or long march around Metro Manila in order to bring its campaign against contractualization to the grassroots level. The “Lakbay-Hustisya” will pass by parishes and communities in , , , and as part of PALEA’s aim to garner the support of ordinary Filipinos in the fight for regular jobs.
Posted by Juan Manggagawa at 2:19:00 PM