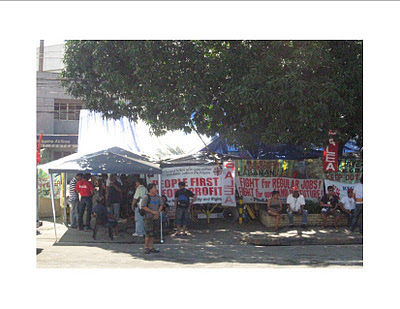 “PAL misled the court into issuing a TRO by concealing that the protest camp at the IFC arose out of an ongoing labor dispute. Although Judge Ramizo should have also exercised prudence since the labor row is a matter of public knowledge. Similar to the Supreme Court recall of the flights attendants case, PAL is using the justice system to cause injustice,” insisted Gerry Rivera, PALEA president and vice chair of Partido ng Manggagawa.

PALEA declared that it shall continue to fight PAL’s abuses through the courts and in protests, and defend the rights of its members, including the campout at the IFC which it has declared to be an occupation inspired by the Occupy Wall Street movement. “Similar to which has fought eviction by the government and police, we will not surrender our occupation of the airport area despite continuing threats of demolition,” Rivera declared.

He revealed that the threat against the peaceful campout and the forcible eviction by protesting PALEA members at Terminal 2 last September 27 will be brought to the attention of Congress. The House Labor Committee holds a hearing this afternoon on the labor row at PAL.

Rivera explained that the regular courts do not have the authority to issue injunction orders in cases originating from labor disputes. He quoted Article 254 of the Labor Code which says: “Injunction prohibited. No temporary or permanent injunction or restraining order in any case involving or growing out of labor disputes shall be issued by any court or other entity, except as otherwise provided in Articles 218 and 264 of this Code.” He added that Article 218 refers to the powers of the National Labor Relations Commission while Article 264 refers to assumption of jurisdiction authority of the Labor Secretary or the President.

He argued that “PAL went to the absurd extent of hiding the existence of PALEA since the complaint does not contain any reference to union and instead the company sued six PALEA members in their individual capacities.”
Posted by Juan Manggagawa at 12:18:00 PM