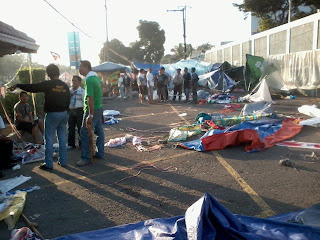 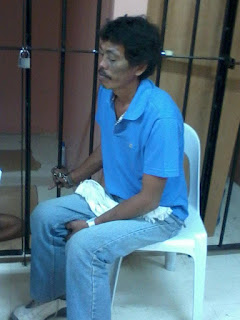 The Partido ng Manggagawa (PM) condemned the daybreak attack carried out today by hired goons believed to be employed by the Philippine Airlines (PAL) to break PALEA’s protest camp.
At around 5:45 this morning, some 40 hired goons armed with long sticks and led by someone with a handgun entered the back entrance of PALEA’s protest camp while most protesters were still sleeping and started tearing down tents prompting PALEA members to fight back.  The attack was effectively repelled but four (4) PALEA members were hurt during the scuffle and three (3) tents were destroyed.  PALEAns were able to apprehend one of the hired goons who was brought to a nearby police station for appropriate legal action.
“This is the second time that PAL carried out a failed attempt to break PALEA’s picketline.  And we see more attacks coming as PAL desperately wanted the protest camp cleared to show the world that everything is normal at Terminal 2.  Unfortunately Lucio Tan’s failed outsourcing/contractualization scheme can’t be hidden and on the contrary, is getting more indignation from the public,” said  PM secretary general Judy Ann Miranda.
At 11:00 am, hundreds of PALEA members held an indignation rally against the dispersal attempt. Miranda also scored Malacanang and labor officials for allowing these things to happen as if harassment and intimidation are normal things that can be carried out by owners of capital against labor’s legitimate protest.
“On the eve of Halloween, the bad spirits of greedy corporations are haunting the workers. This is the second time that PAL has attempted to disperse PALEA’s campout but they are getting more brazen,” exclaimed Gerry Rivera, PALEA president and PM vice chair.
“We heard about ‘all out justice’ from PNoy in response to the Basilan hostilities.  But we haven’t heard about ‘labor justice’ in relation to the ongoing class war between PALEA and Lucio Tan.  Was it because in this class war PNoy had taken the side of Lucio Tan?,” lamented Miranda.
The labor group reiterated its call for President Aquino to cause the reinstatement with full rights of the 2,600 employees locked out by PAL on October 1, 2011.
“There is no ‘all out justice’ without labor justice,” adds Miranda.
PALoween protest
The attack was carried out this morning while PALEAns start their day preparing for their “PALoween Protest”.
The “PALoween Protest” is their way of celebrating the Halloween season in the protest camp.  After the indignation rally this morning, ‘ghosts’ of regular workers wandered along MIA Road looking for their lost jobs and constitutional rights.  A PALoween program follows inside the protest camp in the afternoon followed by a PALoween music jam in the evening.
The attack on PALEA’s camp out came just hours after a string of solidarity actions for PALEA in three in the . US unions and Filipino-American organizations participated in the pickets at the Philippine consulates in , and .
Posted by Juan Manggagawa at 1:26:00 PM