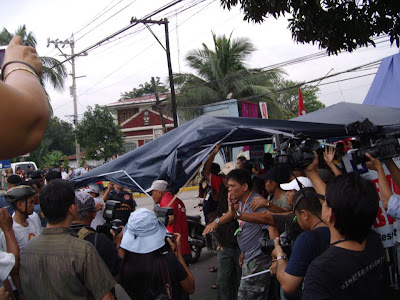 More than 1,000 members of the Philippine Airlines Employees’ Association (PALEA) successfully resisted the attempt to disperse its protest camp yesterday. “We accuse the management of Philippine Airlines (PAL) of using a sheriff and scores of hired goons to bust PALEA’s peaceful and lawful protest. The dispersal attempt was in clear violation of the status quo order of Pasay RTC Judge Maria Rosario Ragasa yesterday in which PAL agreed to respect the campout,” asserted Gerry Rivera, PALEA president and vice chair of Partido ng Manggagawa.

Pasay City Sheriff Virgilio Villar arrived at the PALEA campout at around 3:00 pm yesterday accompanied by some 100 men in white t-shirts or undershirts and blue pants ostensibly to implement an order from Executive Judge Edwin Ramizo of the Pasay RTC. At 4:15 pm, the sheriff and the unidentified men started tearing down streamers at the front of the protest camp but were repulsed by PALEA members. “The sheriff and his goons came back again at 6:00 pm, scuffles broke out but they were finally forced to retreat. All the time, scores of riot police were just a short distance away observing the dispersal attempt,” Rivera explained.

Today the six PALEA members who were sued by PAL for “illegal occupation of the perimeter of PAL’s In-Flight Center (IFC)” submitted their position paper at the sala of Judge Ragasa. PALEA moved for dismissal since the civil courts have no jurisdiction over cases involving or arising out of labor disputes as per Article 254 of the Labor Code. A decision on the case is expected tomorrow.

Rivera argued that “In its insistence in dismantling PALEA’s campout, PAL is exposing its contradictory claims. PAL says that the 2,400 PALEA members cannot be accepted back to work since the airport services, in-flight catering and call center reservations departments have been closed and outsourced. So how come PAL alleges that the IFC which houses the catering department is essential to its operations. This raises the suspicions that it will allow Sky Kitchen, a supposed separate entity that at present provides substandard catering service according to reports reaching PALEA, access to the facilities of the IFC.”

Rivera recalled that the unidentified men came in two groups. One contingent came out of the IFC while another marched down from Terminal 2. When confronted, Sheriff Villar initially admitted that the unidentified men were with him but later denied knowledge of the group. “Nonetheless the circumstances reveal that PAL’s goons were acting in concert with Sheriff Villar’s since every time he attempted to tear down tents and streamers, the goons moved with him,” he detailed.

The thousand-strong ranks of PALEA stayed overnight to guard the camp out. PALEA has vowed to defend its “occupation” which it has announced to be inspired by the Occupy Wall Street protests and part of the global movement against corporate greed and corruption.