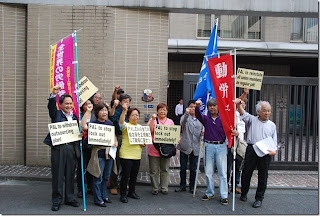 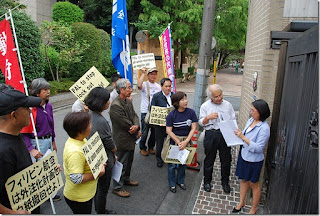 The Philippine Airlines Employees’ Association (PALEA) declared their protest camp as its contribution to the Occupy Wall Street movement which has announced today as an International Day of Action. “More than 1,000 PALEA members and supporters have occupied this part of the airport area since September 28 and today we proclaim it to be part of Occupy Wall Street movement. Similar to Occupy Wall Street which has fought eviction by the New York city government and police, we will not surrender this occupation despite continuing threats of demolition,” said Gerry Rivera, PALEA president and vice chair of Partido ng Manggagawa.

Meanwhile international solidarity actions for PALEA started yesterday with a picket by Japanese railway workers at the Philippine Embassy in . On October 27, US labor unions and the Filipino-American community will picket the Philippine consulate in .

According to the protesters from Doro-Chiba, a railway union in , a staff of the political section came out of the embassy in to receive the letter of concern and said that the document will be forwarded to the person in charge of the embassy and then transferred to the home government. Doro-Chiba members also distributed to passers-by flyers explaining PALEA’s plight and supporting the fight against contractualization.

In its letter, Doro-Chiba asked that the Philippine government “give an adequate guidance to the Philippine Airlines management to stop lock-out immediately, to reinstate all the PALEA members to the original job as regular employment and to reopen good faith negotiation with PALEA, who is raising a quite justified demand to withdraw the outsourcing plan unconditionally.”
In today’s international day of action, Occupy Wall Street supporters will demonstrate in over 951 cities in 82 countries in a coordinated protest against corporate greed and corruption. Occupy Wall Street is a people powered movement that began on September 17 in Liberty Square in Manhattan’s Financial District, and has spread all over the United States and the globe.

Echoing Occupy Wall Street’s call, Rivera said that “The workers and the poor are the 99% of Filipinos but why is PNoy acceding to the greed of Lucio Tan who is just part of the 1%?” Next week PALEA has planned more protests to bring its message against contractualization to the workers and the people.