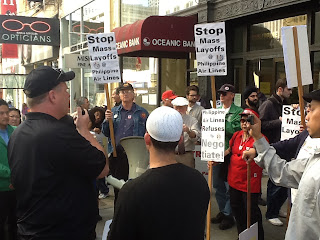 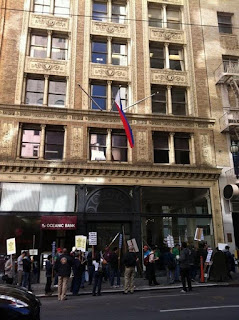 Labor unions and the Filipino-American community staged a picket at the Philippine consulate and ticketing office of Philippine Airlines (PAL) this morning (noon of October 27 in ) in support of the Philippine Airline Employees’ Association (PALEA). A delegation met Philippine Deputy Consul General Alfonso Ver and submitted a letter of concern to regarding the plight of 2,400 PALEA members who were laid off.

Participants in the picket include leaders and members of the unions IAMAW, San Francisco Labor Council, UNITE-HERE Local 2, and NUHW and representatives from Filipino-American groups such as the , NAFCON, and Worldwide Filipino Alliance.

Gerry Rivera, PALEA president and vice chair of Partido ng Manggagawa, sent a message from the . He said that “We appreciate the solidarity of our brother and sister unionists in the and of our kababayans in the Bay Area, especially the support of IAMAW which represents customer service agents of PAL at the . PAL’s outsourcing plan is an example of the corporate greed that has earned the outrage of working people in the and the world. Organized action by workers is the antidote to the organized greed of corporations.”

Later today (6:30 pm, October 27 in ) another picket is to be held at the Philippine consulate in . The solidarity action in LA is led by Filipino-American groups , Ecumenical Fellowship for Justice and Peace and Bantay Pilipinas-LA. Tonight (9:00 am, October 28 in ), a similar action at the Philippine consulate in will be held by UNITE-HERE and UE unions.

The protesters picketed the Philippine consulate and PAL office for an hour and distributed flyers to passersby. Among the points raised by the delegation to Consul General Ver is that in allowing the controversial outsourcing scheme, the Philippine government is possibly in violation of internationally recognized conventions protecting workers’ freedom of association, right to collective bargaining and right to peaceful concerted actions including strikes. They also expressed concern that airline service is deteriorating and passenger safety is put at risk by the untrained and overworked replacement workers who are now operating PAL flights, including the transpacific route which conveys many nationals.

The solidarity actions in SF and LA coincided with the 30th day of the mass termination of PAL employees, a PALEA motorcade protest around the and a call by the Migrant Forum in group for OFW’s to boycott PAL until it heeds the demand of PALEA for workers to return to their regular jobs.