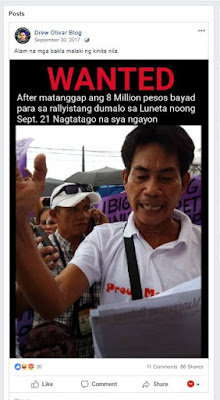 Olivar, in a Facebook post last September 30, 2017 on his “Drew Olivar Blog” accused Ver Estorosas, a PM leader, of absconding after allegedly receiving P8 million to mobilize people for a September 21, 2017 in Luneta. A picture of Estorosas in a rally was maliciously entitled “WANTED” in bold letters in Olivar’s blog post.

“Blabber blogger Drew Olivar is not just an indecent promoter of Pepedederalismo in cahoots with Mocha Uson but is also a thief of images for the profitable production and distribution of fake news. Ver Estorosas, as chairman of the PM Bulacan chapter, is not a fugitive but on the contrary active in leading actions of urban poor for their housing demands and NutriAsia workers for their job security,” stated Rene Magtubo, PM national chair.

He added that the group is consulting with lawyers for the appropriate course of action to defend the rights of Estorosas and stop Olivar from peddling libelous posts.

Magtubo insisted that “Olivar’s accusation is an outright lie and a figment of his imagination. He stole the photo from a rally of housing applicants in NHA Bulacan led by PM that was covered by mainstream media such as CNN Philippines and Rappler. PM was not even a participant to the September 21, 2017 rally in Luneta that was called by the Movement Against Tyranny.”

Olivar’s libelous post was brought to the attention of PM by members of the workers association BPO Shield (formerly Inter-Call Center Association of Workers) who dug into Olivar’s account after the “Pepedederalismo” video went viral.

“The Pepedederalismo video is a waste of taxpayers’ money that was squeezed from the people through TRAIN. We vow to mobilize workers and the poor against the charter change campaign of the Duterte administration. The shift to federalism is a scheme to perpetuate Duterte and trapos like Gloria Arroyo in power. The answer to mass poverty and social inequality is system change not charter change. Chicha hindi chacha!,” argued Magtubo.

“We warn Olivar against stealing more photos of rallies for his business of peddling fake news,” Magtubo cautioned as PM today held a mobilization of workers at the Senate in time for the sponsorship speech by Sen. Joel Villanueva of the security of tenure bill.