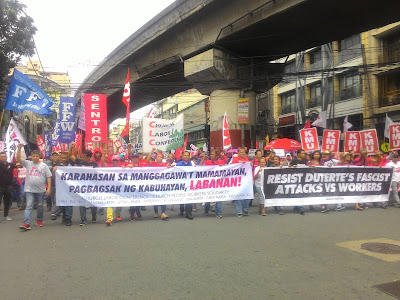 The CLC assembled along UST, España at 9:00 am. After holding a short program, the group marched with the contingent from Welcome Rotunda towards Mendiola for the main program.

“We welcome the solidarity of various church groups and their support for the workers demand for lower prices, higher wages, regular jobs and labor rights in the rally today,” averred Magtubo.

He observed that inflation rose from just 3% last December to more than 6% in Metro Manila since the implementation of TRAIN in January. “In the face of this, wage boards in nine regions gave paltry salaries hikes. Duterte’s promise of abolishing regional wages is just as broken as his end endo pledge,” Magtubo added.

The groups warned the government to heed workers legitimate demands lest it further leads to the escalation of labor unrest. Notices of strikes and actual strikes are on the rise, especially in the last several months.

Workers of the leading cigarette firm Philip Morris Fortune Tobacco Corp. (PMFTC) are on the verge of a strike because of a dispute over the closure of its Vigan, Ilocos Sur redrying plant and the mass layoff at its Marikina factory. Some 90 and 220 workers were affected respectively by the shutdown and retrenchment. After the Martsa ng mga Manggagawa, the PMFTC labor union convened a general assembly this afternoon to unite its membership for a strike vote planned in the next few days.

“The Constitution mandates that workers receive their fair share of the fruits of production. But at PMFTC, retrenchment was the company’s reward for increased labor productivity and workers meeting key performance indicators. What kind of system is this?,” argued Magtubo, who is a former president of the Marikina union.

The PMFTC labor union is alleging unfair labor practice over the closure and retrenchment. The union slammed the bad faith and deceit attending the so-called right-sizing plan of management. The group believes that union busting is the real agenda as the non-union sister factory in Sto. Tomas, Batangas just regularized 100 contractual employees. In contrast, the Marikina and Vigan plants are both unionized factories.