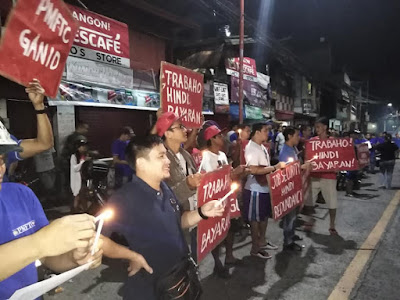 Workers of Philip Morris-Fortune Tobacco Corp. (PMFTC) picketed today the Intramuros office of the Department of Labor and Employment while mediation was ongoing between management and the union. Members of the Philip Morris-Fortune Tobacco Corp. Labor Union (PMFTCLU-NAFLU) and their supporters carried placards that said “Job security not redundancy” and “Welga sagot sa tanggalan.”

The union is set to hold a strike vote in a few days. A strike can then be held seven days after a majority of union members vote yes. Yesterday the union held a general assembly in preparation for the strike vote.

The labor dispute at the leading cigarette manufacturer is part of a rising wave of workers unrest. Scores of notices of strike have been filed and strikes are erupting in various companies. This morning, employees of the big Japanese pharmaceutical firm Takeda Healthcare Philippines in Rockwell, Makati went on strike over a deadlock in collective bargaining negotiations.

The leading cigarette manufacturer shut down its Vigan, Ilocos Sur redrying plant affecting 90 workers and also laid off 220 workers (a third of the 600 workforce) at its Marikina factory early this month. In response the union filed notice of strike last August 9 and immediately started protests.

“The Constitution mandates that workers receive their fair share of the fruits of production. But at PMFTC, retrenchment was the company’s reward for increased labor productivity and workers meeting key performance indicators. What kind of system is this?,” argued Rene Magtubo, chair of Partido Manggagawa and former president of the Marikina union.

The PMFTCLU is alleging unfair labor practice over the closure and retrenchment. The union slammed the bad faith and deceit attending the so-called right-sizing plan of management. The group believes that union busting is the real agenda as the non-union sister factory in Sto. Tomas, Batangas just regularized 100 contractual employees. In contrast, the Marikina and Vigan plants are both unionized factories.

“Management told the union that the Vigan plant will be closed and sold to another entity. No other details were given. This raises the suspicion that this is another outsourcing program similar to the contractualization scheme at Philippine Airlines,” declared Gerry Rivera, president of the Philippine Airlines Employees Association (PALEA-TUCP) and head of the newly formed Kapatiran ng mga Unyon at Samahang Manggagawa. Both PALEA and PMFTCLU are members of the Kapatiran.

He declared that “We express support for the fight of PMFTCLU for job security and against union busting. Ang laban ng isa ay laban ng lahat.”

“PMFTC management has been absolutely opaque behind the misnamed right-sizing plan. When management first discussed the plan before the union, they withheld the names of workers affected, they did not disclose how the termination process will proceed and finally they did not give any solid basis for the closure and redundancy. And then just hours after the meeting with the union, management unveiled its surprise gift to unsuspecting workers who were cajoled into signing separation without the presence of union officers who barred from entering the factory,” Magtubo elaborated.

Photos of the protests can be accessed at PMFTCLU’s Facebook page: https://www.facebook.com/zpipsamonte/