PALEA says criminal charges against 41 members is just another harassment 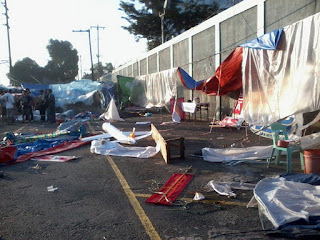 The Philippine Airlines Employees’ Association (PALEA) declared that the criminal charges filed by Philippine Airlines (PAL) against 41 of its members are just part of the continuing harassment of its peaceful protest camp. “PAL is using the courts to bully our members in to submission. The filing of charges left and right is meant to coerce PALEA members to avail of separation package and to apply as contractuals in Sky Logistics and Sky Kitchen which are gravely in need of the trained expertise of these workers,” announced Gerry Rivera, PALEA president and vice chair of Partido ng Manggagawa.

PALEA is confident that similar to the dismissal of PAL’s motion for a temporary restraining order against the campout by Pasay Judge Maria Rosario Ragasa, the criminal charges will also be found without merit. “All the incidents at the protest camp arose out of and involve the labor dispute between PAL and PALEA and thus jurisdiction properly resides in the National Labor Relations Commission or the Labor Department,” Rivera explained.

He argued that “The big question is: Why is PAL trying to operate the In-Flight Center (IFC) when its in-flight catering and airport services have already been closed down? Evidently PAL will allow Sky Logistics and Sky Kitchen use of the IFC which means the service providers are nothing but illegal labor-only contractors.”

Rivera also described the incident involving the PAL truck that attempted to leave the PAL In-Flight Center last October 29 as “a diversionary tactic while hired goons attacked the protest camp.” Rivera added that “The PAL truck tried to leave the compound accompanied by a phalanx of security guard in full riot gear. But despite their overwhelming number vis-avis a handful of PALEA members, the PAL guards retreated when the attack on the other end of the protest camp was already proceeding.”

He recounted that “At around 5:45 am, some 40 hired goons attacked the PALEA protest camp while women and children were still sleeping. Armed with long sticks and stones, the goons destroyed tents in half of the campout and injured seven PALEA members in the violent daybreak. One of the goons was apprehended and confessed in a sworn testimony to the police that they were paid by management. In a new outsourcing scheme, PAL had employed the services of a goons-provider to undertake the dispersal attempt.”

PALEA is asking the public to “Look at the complete picture. Be a critical judge.”
Posted by Juan Manggagawa at 11:40:00 AM