It’s the 99%, not Gloria, who are the real victims of injustice in this country 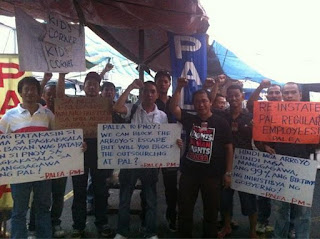 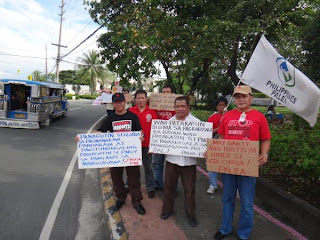 The Partido ng Mangagawa (PM) today said it is the 99% and not former President Gloria Macapagal-Arroyo who are the real victims of tyranny and injustice in this country. Members of PM and the Philippine Airlines Employees’ Association (PALEA) held a 2:00 p.m. rally at the Our Lady of the Airways Parish at the corner of Sucat Road and MIA Road to air their sentiments on the alleged escape of the Arroyos.
Earlier today the groups also joined running priest Fr. Robert Reyes in a picket at the Supreme Court, a day after the high tribunal allowed the former President, who is facing criminal charges, to seek medical treatment abroad. They brought placards which read: “Itlog ni Topacio ibigay kay PNoy para tumindig vs Lucio Tan,” “Panagutin si GMA sa pagnanakaw, pandaraya at pagsisinungaling. Panagutin si PNoy sa pang-aapi sa manggagawa,” “Wag patakasin si GMA sa pagkakasala sa bayan. Wag patakasin si PNoy sa pagkakasala sa manggagawa ng PAL.”
“Gloria was merely banned from leaving the country for a while, whereas thousands of PAL workers and several millions of contractuals, unemployed and underemployed out there are being denied the right to live decent lives,” stated PALEA president and PM vice chair Gerry Rivera.
Renato Magtubo, PM national chair, agreed with the position of DoJ Secretary Leila De Lima in invoking a judicial process available to all, in this case a motion for reconsideration, to take its course before Gloria is finally allowed to travel and seek medical treatment abroad. He said that “The Pinoy Bonnie and should not be allowed to escape from facing cases of stealing, cheating and lying. They will not get any sympathy from oppressed workers in their attempt to fly out of the country and out of reach of justice.”
“As to PAL’s implementation of its outsourcing plan we stand by our position that outsourcing should not be implemented while the case remains pending before the Court of Appeals,” said Rivera.
Unfortunately thousands of PAL workers were thrown out of work since October 1, 2011 when De Lima’s boss, President Benigno Aquino, allowed Lucio Tan to proceed in firing 2,600 its regular employees and outsource their jobs to third party service providers in clear violation of the Constitution, the Labor Code and international conventions.
The only difference between the two cases, Magtubo added, is that PAL’s outsourcing was motivated by corporate greed while Gloria’s bid was a desperate attempt to escape looming imprisonment.
“Indeed, the country’s justice system is more ill than the ailing Gloria,” concluded Magtubo.
Posted by Juan Manggagawa at 2:42:00 PM