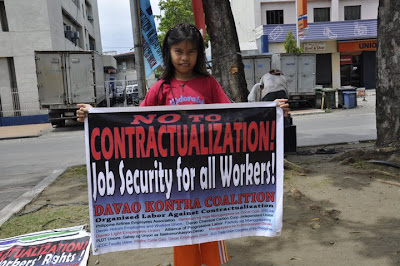 In a decision dated August 11, the Office of the President (OP) denied the motion for reconsideration of the Philippine Airlines Employees Association (PALEA) and affirmed its earlier ruling allowing Philippine Airlines to lay off 2,600 employees and make them contractual workers in third-party service providers. Gerry Rivera, PALEA President and Partido ng Manggagawa (PM) vice chairperson, slammed the decision by saying “With the OP decision permitting PAL to retrench thousands of workers despite billions in profit, PNoy has unveiled his fire-all-you-can policy. This overturns the provisions of the Labor Code and jurisprudence of the Courts that serious financial losses are a necessary ground for retrenchment.”

PALEA is already preparing together with its lawyers, who received the OP decision yesterday, an appeal to be filed at the Court of Appeals. The union has announced a protest action on Monday against the OP decision. Also Rivera is going to ask for support from fellow airline unions in the Asia-Pacific region as he is attending today a seminar on the aviation industry sponsored by the International Transport Workers Federation.

PALEA, PM and the Church-Labor Conference will hold a motorcade on the afternoon of August 22 to protest the OP decision and highlight the campaign against contractualization. The motorcade will start at the PEZA office in Buendia corner Roxas Boulevard and then proceed to Ayala Avenue in Makati.

“PNoy’s employment policy is a second-rate trying-hard copycat of American industrial relations where giant money-making corporations can fire at will. But he should beware since the result of flexible employment relations in the US was not economic progress but financial crisis. The unequal distribution of wealth is at the root of the global financial crash of 2008 and even the present threat of a double-dip recession in the US,” Rivera stated.

The decision came one week after PALEA filed manifestations to the OP and the National Labor Relations Commission (NLRC) last August 3. The manifestations asked the OP and NLRC to take consideration of PAL’s net yearly income of USD 72.5 million. “The OP has turned a blind eye to the fact that PAL’s robust financial health belies the latter’s argument that outsourcing is necessary for the flag carrier to survive. Since PAL is awash in profits even without outsourcing then there is no reason for it to retrench employees,” Rivera asserted.

He added that “But even with just the declared yearly income, PAL can easily cover the costs of PALEA’s CBA proposal for 2008-2013. Again there is no cause for PAL to refuse to bargain in good faith with PALEA.”
Posted by Juan Manggagawa at 12:34:00 AM