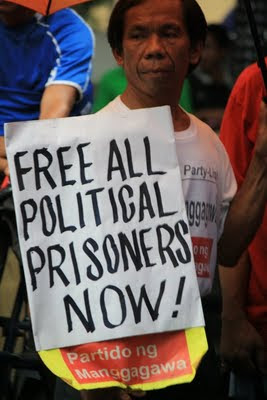 PM together with the members of the Philippine Airlines Employees Association (PALEA) trooped to the Department of Justice this morning to press for the release of all political prisoners.

Miranda said political prisoners should be considered by the government as “beneficiaries” of peace even prior to the conclusion of final peace agreements with the revolutionary movements.

“In fact an act of magnanimity can be extended by the government to political prisoners even without the peace talks as many of them have already served their full sentences from many years of detention,” argued Miranda, citing the case of Juanito Itaas who had been serving prison terms since 1989.

There are still more than 300 political prisoners languishing in different jails all over the country according to human rights groups.  All of them were accused of having links with either the communist or separatist movements but were held for as common criminals.

Political prisoners at the National Bilibid Prison went on hunger strike since President Aquino’s State of the Nation Address (SONA) to appeal for their immediate and unconditional release.   After the dialogue with human rights groups and DOJ officials last week, Justice Secretary Leila de Lima ordered prison officials to look into the conditions of the hunger strikers.
Posted by Juan Manggagawa at 11:34:00 AM