PALEA and allies hold motorcade vs. contractualization, vow to escalate campaign against planned layoffs at PAL 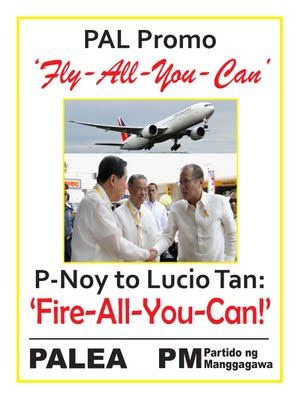 “At the end of the motorcade, we will be holding a program at the , who’s death anniversary was commemorated yesterday. Ninoy said that the Filipino was worth dying for but unfortunately his son PNoy believes that Filipino workers are worth sacrifing,” declared Gerry Rivera, PALEA president and PM vice chair.

The protest motorcade will start by 4:00 p.m. at the office of the Philippine Economic Zone Authority in cor. Buendia and then proceed to in . Rivera revealed that more mass actions are slated this week.

Explaining the labor groups’ support for PALEA, Renato Magtubo, PM chair said that “For PALEA this is not just a fight for their future as regular PAL employees. It is also a struggle for the welfare of all Filipino workers. There is no dignity, there is no future in a contractual job. Ang kontraktwalisasyon ay isa ring anyo ng wang-wang. It is capitalist abuse of workers for more profit.”

Rivera argued that “After making its workers sacrifice their collective bargaining rights for more than a decade, PAL now wants to rewards us with mass termination and refusal to bargain.” The PAL-PALEA collective bargaining agreement (CBA) has been suspended for 13 years since 1998. As a consequence, the last wage hike enjoyed by PAL employees was in 2008.

In response to Malacanang’s call for PALEA to refrain from a strike, Magtubo asserted that the Palace should instead exert moral suasion on PAL to begin negotiations for a CBA. “If he wants to prevent a paralyzing strike, PNoy should mediate between PAL and PALEA for an agreement that any outsourcing plan should be subject to collective bargaining negotiations rather than unilaterally imposed on employees. This is the win-win solution to this protracted labor row,” Magtubo insisted.
Posted by Juan Manggagawa at 11:26:00 AM