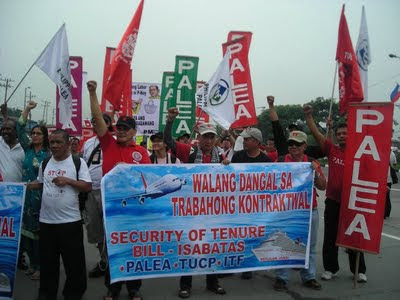 With Philippine Airlines (PAL) reporting a net yearly income of USD 72.5 million, the Philippine Airlines Employees Association (PALEA) once more petitioned the government to stop the outsourcing plan of management and order it to begin negotiations for a collective bargaining agreement (CBA). This was contained in manifestations by PALEA to the Office of the President (OP) and the National Labor Relations Commission (NLRC) filed last August 3. PALEA has a pending motion for appeal on the legality of the outsourcing plan at the OP while its case for refusal to bargain is being heard by the NLRC.

“We call on the OP and the NLRC to take consideration of PAL’s more than PhP 3 billion profit (at USD to PhP exchange rate of 42.5) in making their decision in on the pending cases. PAL’s robust financial health belies its argument that outsourcing is necessary for the flag carrier to survive. Since PAL is awash in profits even without outsourcing then there is no reason for it to retrench more than 2,600 employees,” insisted Gerry Rivera, PALEA president and Partido ng Manggagawa vice chair.

He added that “But even with just the declared yearly income, PAL can easily cover the costs of PALEA’s CBA proposal for 2008-2013. Again there is no cause for PAL to refuse to bargain in good faith with PALEA.”

Aside from PAL’s big income, PALEA also cited in its manifestation the 14% increase in total current asset, decrease in the company’s total liabilities, 176% increase in equity among its shareholders, and even the growth of the flag carrier’s fleet to 51 aircraft.

“If despite PAL’s lucrative operations, PNoy allows the outsourcing plan, then it would mean a historic shift in government policy to allow profitable companies to retrench thousands of its workers. It would mean making our employment policy a second-rate trying-hard copycat of American industrial relations where giant money-making corporations can fire at will,” Rivera explained.

He furthered that “But PNoy should beware since the result of flexible employment relations in the was not economic progress but financial crisis. The unequal distribution of wealth is at the root of the global financial crash of 2008 at even the present threat of a double-dip recession in the .”
Posted by Juan Manggagawa at 11:50:00 AM