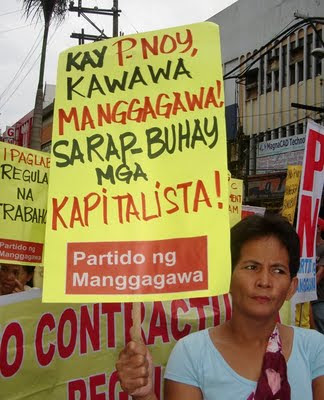 The Philippine Airline Employees’ Association (PALEA) rejected the invitation of Philippine Airlines (PAL) management for a dialogue today on implementing the plan to retrench 2,600 workers. In a letter sent yesterday to PAL President Jaime Bautista, PALEA stated that “We maintain our position that despite the decision of the Secretary of Labor, and the Office of the President, PAL cannot prematurely implement its planned mass termination of employees and union members… PALEA will exhaust all remedies available to it, including seeking a judicial resolution of the case.”

Gerry Rivera, PALEA President and Partido ng Manggagawa (PM) vice chair, nonetheless clarified that they are willing anytime to discuss with PAL measures to make the company viable except outsourcing jobs. PALEA is already preparing with its lawyers, Attys. Marlon Manuel and Joven Dellosa, a petition at the Court of Appeals on the legality of the retrenchment and outsourcing plan.

Meanwhile the embattled PALEA garnered the support of the International Transport Workers Federation (ITF) and its affiliates in the Asia Pacific region. In a press conference this morning, ITF general secretary for Asia Pacific, Mahendra Sharma, declared the global union’s solidarity with PALEA. ITF Asia Pacific officers and member unions in Garuda of Indonesia, Air and Malaysian Airlines are in for a workers seminar but took a short break for the solidarity activity with PALEA.

Protests against the decision of the Office of the President allowing PAL to lay off more than half of its workforce already started yesterday with PALEA members wearing black ribbons on their uniforms while at work. On Monday PALEA together with PM, Hanjin workers and the Church-Labor Conference will hold a motorcade. The motorcade will assemble on 4:00 pm at the office of the Philippine Economic Zone Authority in Buendia cor. and then proceed to in by 5:00 pm.

PALEA insists that PAL’s robust financial health belies its contention that outsourcing is necessary to make the flag carrier profitable. “PAL actually earned more than USD 72.5 million in its last fiscal year from April 2010 to March 2011 since it paid USD 46.5 million in outstanding debt last June 7, 2010. Even granting PAL’s reasoning that its profitability is cyclical, such falls short of jurisprudence that sustained losses are a necessary ground for retrenchment,” Rivera asserted.

Rivera argued that “PAL claims that outsourcing is a global trend that it must follow. Instead we see an international pattern of resistance against contractualization in the aviation industry as shown by the present labor disputes erupting in PALEA, Airlines, Qantas and Jetstar.”
Posted by Juan Manggagawa at 9:04:00 AM