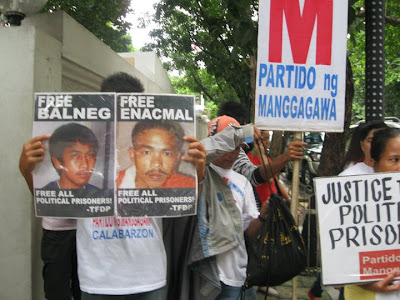 Former Scout Ranger commander and an ex-political detainee himself, Gen. Danilo Lim, is joining the human rights community led by the Task Force Detainees of the Philippines (TFDP) and the Philippine Alliance of Human Rights Advocates (PAHRA), representatives of the Commission on Human Rights, and the Catholic Bishops Conference of the Philippines - National Secretariat for Social Action –Justice and Peace (CBCP-NASSA) in a visit this afternoon to political prisoners at the National Bilibid Prison (NBP) who are now on their 23rd day of hunger strike.

Joining Lim is another ex-political detainee, Nilo Tayag, who is now a bishop of the Philippine Independent Church (IFI).

On Saturday, the Catholic Bishops Conference of the Philippines (CBCP) urged President Benigno Aquino III to free political prisoners through an executive clemency especially for those who have already served their long and unjust sentences.

Partido ng Manggagawa renewed its call for President Aquino to end the sufferings of the remaining political prisoners as many of them had been convicted on false charges of common crimes.

One of the hunger strikers, Juanito Itaas, was in jail since 1989 for the assassination of Col. James Rowe, a charged he vehemently denied.  In prison for 22 years, Itaas is now considered one of the longest serving political detainees in the world, next to Nelson Mandela who was imprisoned for 27 years for sabotage and high treason. According to reports, is holding the longest serving political prisoner, a Palestinian, who is serving his 34th year in prison.

According to Gen Lim, he and Itaas once shared the same prison compound as he was also detained in connection to the 1989 coup.  Itaas is now leading the hunger strike for freedom at the NBP.

On Sunday night, two more hunger strikers, Diony Sarad and Tendero Fuentes, were brought to the NBP Infirmary for severe abdominal pain.  Doctors from the Medical Action Group (MAG) who joined today’s visit are looking into the health condition of the hunger strikers.

The groups were still hopeful that President Aquino would finally heed their appeal for clemency since political prisoners are not hardened criminals who warrant continued imprisonment for life.

Human rights groups were also set to have a dialogue with the Presidential Human Rights Commission (PHRC) at Malacanang earlier this morning.  Another dialogue with the Department of Justice is scheduled this coming Friday.
Posted by Juan Manggagawa at 11:09:00 AM