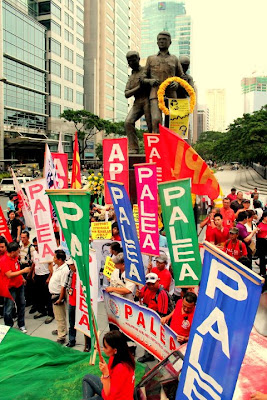 “Despite the overwhelming number of shares owned by Lucio Tan, the so-called Employees’ Rehabilitation Shares still comprise the fourth largest block of PAL stocks and so we believe that it is necessary to listen to the demands of PAL employees,” said Gerry Rivera, PALEA president and vice chair of Partido ng Manggagawa (PM). The Employees’ Rehabilitation Shares or employee stock options were part of the agreement in 1998 that included a PAL board seat for PALEA in return for the moratorium in the collective bargaining agreement.

“We have sacrificed our collective bargaining rights for 13 long years since 1998 and it is unjust for PAL to reward us with retrenchment for it. We appeal to management to craft a business model that does not include outsourcing jobs,” Rivera argued.

He added that “Instead of adding value to the company, the outsourcing plan is a heavy baggage for PAL. Yet PAL’s experience has shown that it does not need outsourcing to grow and be profitable.”

The financial statements for fiscal year 2010-11 that was presented to the stockholders meeting show USD 72.5 million in net income. This was aside from a USD 46.5 million payments in PAL’s outstanding debt last June 2010. PALEA has thus been insisting that PAL’s healthy financial condition belied the need to terminate some 2,600 workers.

The rally at the stockholders meeting came on the heels of a PALEA-led motorcade that traversed from the to in . PAL ground employees have also been wearing black ribbons at work since the Office of the President (OP) released its decision last August 11 allowing the outsourcing plan.

PALEA had announced that it will resist should management prematurely implementing the outsourcing scheme since it believes that the OP ruling is not executory pending final judicial resolution of the case.

PALEA plans to file a petition at the Court of Appeals in the next few days to question the legality of the mass layoff and job outsourcing of more than half of the membership of the union.
Posted by Juan Manggagawa at 9:55:00 AM