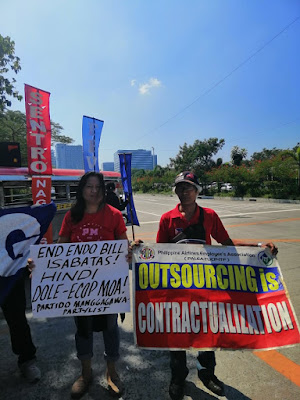 Members of Partido Manggagawa (PM) partylist and workers from different labor groups trooped to the Senate this morning for a last-minute appeal for the passage of the Security of Tenure (SOT) bill.

Rene Magtubo, PM national chair, said that “With the senatorial campaign starting in a few days, labor will judge who its friends and enemies are by their action on the SOT bill. We remind the members of the Senate of their promise to the workers to do their part in the fight to end the injustice of contractualization by passing the SOT bill. We remind the senators of their professed commitment to the working class as well as for the general public and will hold them accountable to their promise to provide the legal framework to help end the practice of endo.”

He likewise slammed Labor Secretary Silvestre Bello for a deal with employers that will propagate not eradicate contractualization. “Rather than ensuring workers become regular, Bello is instead making regular meetings with the Employers Confederation of the Philippines on their demand that regularization commence only after three years of employment and that labor inspections be suspended,” Magtubo declared.

He added that “The struggle for safe, dignified and regular jobs has and will continue to be waged through the active action and participation of the workers within and outside the formal halls of power. The SOT bill currently up for deliberation is the product of a broad and united labor coalition that has crossed organizational and political lines in the firm conviction to fight for the right of working people to enjoy dignified and protected labor.”

“To this end, we call for the passing of the pro-worker SOT bill, one not watered down by compromises and loopholes that would negate the efforts of organized labor that has participated in lobbying, dialogue and social action to get the bill to where it is today. The failure to pass the SOT bill is a betrayal of the workers that so far have been engaging the legislative branch of government and has campaigned for the end of endo even before 2016 where it was first identified as one of the key priorities of the incumbent administration,” Magtubo elaborated.

He affirmed that “We reiterate that the SOT bill represents the best and only opportunity to decisively end the practice of endo. Without a strong law to protect the interests of workers, millions will remain vulnerable to precarious working conditions and abusive labor practices. The supposed regularization agreement between DOLE and ECOP does not tackle the root cause of endo. The complete lack of worker participation notwithstanding, failing to pass a SOT law means that workers will continue to be susceptible to the scourge of contractualization. Only a holistic approach that involves legislative protection to regular and dignified work will guarantee the security of workers. We thus call for the passage of the SOT law, as it recognizes the invaluable service of millions of Filipino workers as the backbone of the economy.”