Workers warn of unemployment with OFW’s going back, Boracay closure and TRAIN impact 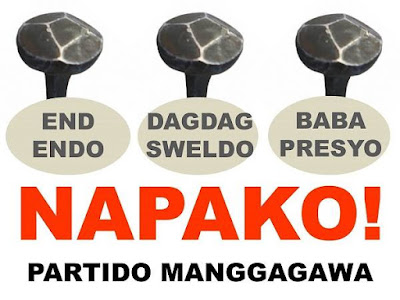 On the eve of Labor Day, the workers group Partido Manggagawa (PM) warned of rising unemployment with a call from President Rodrigo Duterte for Kuwaiti OFW’s to come home, the six-month closure of Boracay and the impact of TRAIN on the economy.

As part of the buildup for the massive Labor Day indignation rally, the union Philippine Airlines Employees Association (PALEA) is holding a motorcade around Ayala Ave. this afternoon while members of PM-Kabataan distribute leaflets appealing for participation in tomorrow’s protest.

Tomorrow, PM is participating in the labor unity rally in Manila and other key cities to slam the President for his broken promise of ending endo. Aside from Manila, PM chapters in Cebu, Bacolod, Davao and General Santos are mobilizing for the nationwide Labor Day commemoration. The group is calling for the government to drop the chacha and focus instead on regular jobs and a living wage.

“Where are the jobs for the 260,000 OFW’s deployed in Kuwait, the 27,000 registered and unregistered workers displaced in Boracay, the 900 workers laidoff by Coca-Cola due to the TRAIN law, the 600,000 college graduates and thousands more of K-12 graduates,” declared Judy Ann Miranda, PM secretary-general.

The group is alarmed as well with the rising inflation together with worsening unemployment. Economists predict that inflation will hit 4.6% this April. Inflation has steadily climbed every month from just 2.9% last December.

Last week, PM held a protest at the offices of the Department of Trade and Industry (DTI) and the Employers Confederation of the Philippines (ECOP) to highlight its call for decent jobs for young workers and slam rising inflation.

Miranda cited a recently released report by the World Bank about the lack of quality jobs in the country and the worsening inequality as a result.

She added “And if these young and old workers are lucky enough to find a job, will it be regular and pay a living wage? We all know that the reason OFW’s go abroad is because of lack of decent jobs in the Philippines. So why will Kuwaiti OFW’s fly back home when nothing has changed in the jobs situation in the Philippines?”

Miranda insisted that “President Duterte is again making a personal promise, this time of providing jobs for OFW’s. But he has yet to deliver on his campaign promise two years go to end endo the moment he assumes the presidency. Mr. President, not another broken promise.”

Good day !!
We are Christian Organization formed to help people in need of help,such as
financial assistance, Do you need a loan to pay your bills? Do you need
Personal Business Car or Student loans? Need a loan for various other
purposes? If yes contact us today.
Please these is for serious minded and God fearing People.

Nice post.Thanks for sharing it.
Non Performing Assets in India