Only a labor-drafted EO is acceptable to workers - PM 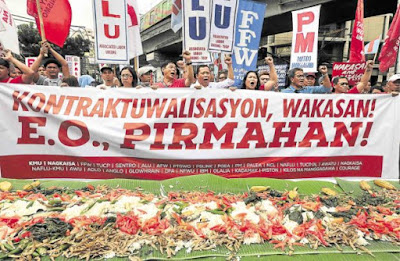 Reacting to Malakanyang spokesperson Harry Roque’s statement that labor groups could expect a pro-worker Executive Order on or before Labor Day, Partido Mangggagawa Chair avers, “it remains to be seen”.

“Labor groups have gone through five drafts, and every draft was rejected by employers led by the Department of Trade and Industry (DTI) and the DOLE did nothing. Waiting for a pro-worker EO therefore that is agreeable to the employers is like waiting for a crow to change its color white”, Magtubo explained.

The 5th labor-drafted EO, Magtubo said, “contains government’s policy of direct hiring in employment relations but offers exemption to jobs or function that can be contracted out subject to consultation with the labor secretary.”

“Only the President can issue a pro-worker EO if he wants to in order to realize his campaign promise. Now is the time that the President should show his political will by signing the labor-drafted EO”, he added.


PM calls on all labor groups to close rank, stand firm on the position that labor will only accept a labor-drafted EO, and prepare for a nationwide “all labor” mass action on Labor Day.

Hello Everybody,
My name is Ahmad Asnul Brunei, I contacted Mr Osman Loan Firm for a business loan amount of $250,000, Then i was told about the step of approving my requested loan amount, after taking the risk again because i was so much desperate of setting up a business to my greatest surprise, the loan amount was credited to my bank account within 24 banking hours without any stress of getting my loan. I was surprise because i was first fall a victim of scam! If you are interested of securing any loan amount & you are located in any country, I'll advise you can contact Mr Osman Loan Firm via email osmanloanserves@gmail.com