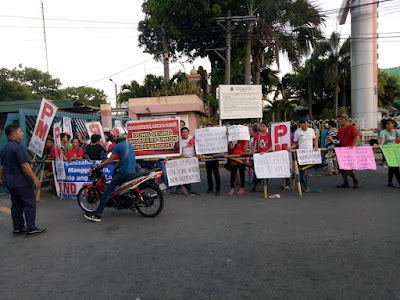 Workers of a garments factory in the Cavite ecozone voted yesterday to go on strike in response to the mass termination of 16 union officers. The law provides a seven-day notification period before any actual work stoppage can be launched by workers of Dong Seung Inc. The National Conciliation and Mediation Board have called for a conciliation meeting between the company and the union on Monday.

Yesterday scores of Dong Seung workers and their supporters trooped to the Cavite ecozone main gate to protest the union busting and call for respect for freedom of association. The rally followed a forum in which Cavite ecozone workers aired their grievances about low pay, insecure jobs, verbal harassment and excessive work quotas.

The Dong Seung union officers were served notices of termination in their houses by an HR officer of the company last April 12. They were supposed to back to work on April 13 as part of the agreement. An earlier strike notice was precipitated by the one-month suspension of the 16 union officers.

“The firing of all 16 union officers, including the union president, is just the latest in a series of union busting moves by management. Moreover it is a maneuver done in bad faith as the union just withdrew a notice of strike earlier filed. The retraction of the strike was part of an agreement mediated by the Labor Department wherein workers will be accepted back to work after an investigation by management,” explained Juanito Diaz, president of the Dong Seung Workers Union-Independent.

Photos of the Dong Seung workers rally can be accessed at FB page of Partido Manggagawa: https://www.facebook.com/partidomanggagawa/


$$$ GENUINE LOAN WITH 3% INTEREST RATE APPLY NOW $$$.
Do you need finance to start up your own business or expand your business, Do you need funds to pay off your debt? We give

out loan to interested individuals and company's who are seeking loan with good faith. Are you seriously in need of an