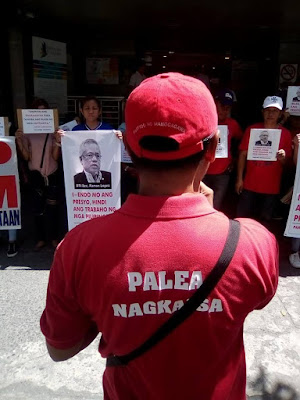 In response to the latest survey on people's concerns, the militant labor group Partido Manggagawa (PM) today called on the administration to drop charter change and shift it focus to poverty eradication.

“The pervasiveness of poverty as a result of low wages, high prices of goods and services, unemployment and lack of quality jobs cannot be swept under the rug by a more sensational war on drugs, the ambitious plan to build-build-build, or by shifting our form of government into federalism,” argued Rene Magtubo, PM national chair.

Among the group's demands for the coming Labor Day rally is opposition to the charter change initiative of the government.

Chicha is a Filipino slang for food, but for the labor group, its meaning expands to other rights and entitlements that enable workers to raise their standard of living.
The other day dozens of PM members among workers, women and youth led a picket at the Department of Trade and Industry office in Makati to assail government's inaction on inflation and its pro-endo policy. The protest was a buildup to the massive labor unity mobilization planned on May 1 to push for workers' demands such as regular jobs and a living wage.

According to Magtubo, poverty concerns had always been in need of immediate action and unless addressed in a holistic manner, these issues will continue to hound any administration. He added that the failure of President Duterte and his Congress to stop contractualization, abolish the regional wage boards, and to control the rising prices of goods and services due to the imposition of new taxes will always’s be viewed by the working class as a regression rather than an improvement in their quality of life.

The most recent Ulat sa Bayan report by Pulse Asia revealed that the first three concerns remained to be the issues that most Filipinos want the Duterte administration to address. The survey conducted between March 23-28, 2018 showed that wage hike, controlling inflation and reducing poverty were the top three concerns while charter change landed last in the list with only 3% of Filipinos demanding immediate action for it from the President.

Magtubo said the same sentiments will surely be expressed by workers who will be mobilizing themselves nationwide in the coming Labor Day celebration.