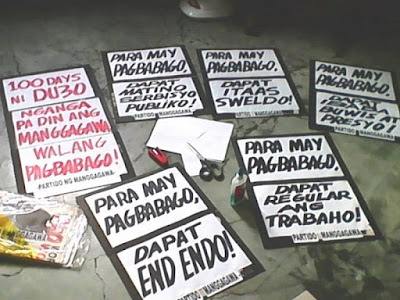 One of PM-Cebu's leader and organizer, Orlando "Ka Lando" Abangan, was shot and killed last September in a vigilante style killing. His killing remains unsolved.
PM national chair and CLC co-chair Renato Magtubo said the next five and a half years will be more challenging for the Duterte administration amid the sharpening contradictions between the contending classes inside and outside his administration in dealing with other social programs.
He cited as an example the strong opposition coming from local and foreign business groups against workers demand to finally end the policy contractualization and the realization of the living wage principle enshrined in the constitution.
“Sa manggagawa ay simple lang ang depinisyon ng pagbabago. Wala nito kung nariyan pa rin ang endo at mababa ang sweldo. Wala nito kung mananatiling untouchable ang mga gaya ni Lucio Tan, Henry Sy, at iba pang endo lords,” added Magtubo.
Labor groups were all opposed to the win-win solution on endo being proposed by the Department of Trade and Industry (DTI) which promotes regularization outside of the principal employers but to the third party service providers such as manpower agencies and cooperatives.
The group is also opposed to the planned imposition of regressive taxes to replace revenue loss resulting from the removal of VAT exemptions from senior citizens and the lowering of income taxes for corporations and individuals in the higher tax brackets.
Posted by Juan Manggagawa at 8:51:00 AM