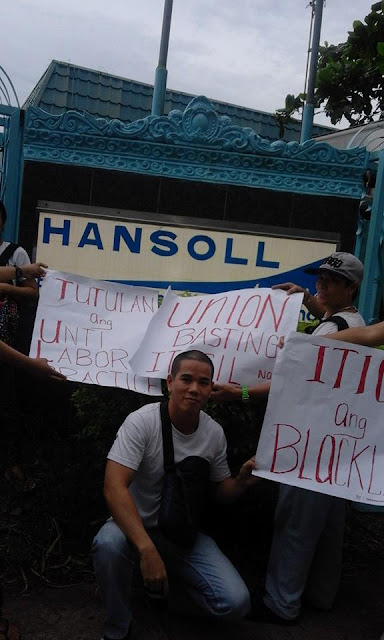 Mediation at DOLE today:
Biggest garments factory in Cavite EPZA shuts down to bust union
WHAT: Mediation between management and union of biggest garments factory in EPZA employing some 1,000 workers
WHEN: Today, October 24, 2016, 2:00 p.m.
WHERE: NCMB Imus @ MYP GBY Building, Bayan Luma 7, Aguinaldo Highway, Cavite
DETAILS:  The union is alleging union busting as the garments factory Faremo International Inc. located in the Cavite EPZA declared permanent shutdown. Some 1,000 workers, mostly women, will made jobless as a result. Faremo is owned by the Korean textile multinational Hansoll and supplies to global brands such as Gap, JCPenney and Kohl's.

A union was formed by workers at Faremo last year in a bid to redress grievances such a low pay, verbal abuse and lack of benefits. A collective bargaining agreement (CBA) was concluded just last May.

The union is alleging that the closure is illegal since it is meant to bust the union and destroy the CBA. Early this month, management filed for temporary closure and the union proposed work rotation to preserve jobs and prevents layoffs. Management ignored the proposal and responded with the permanent closure.
Posted by Juan Manggagawa at 3:56:00 PM