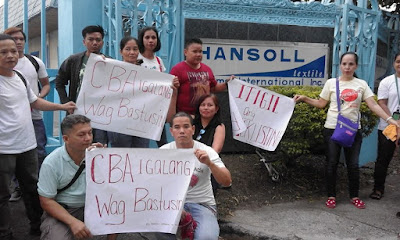 The biggest garments factory at the Cavite export processing zone (EPZA) in Rosario shutdown yesterday but its workers are alleging that it is a union busting maneuver. The management of Faremo International Inc. filed last Friday a notice for permanent closure. In response the labor union filed a union busting complaint.

Almost 1,000 workers were laid off yesterday at Faremo, the large majority of whom are women. Faremo International is a subsidiary of the Korean textile multinational company Hansoll and supplies to global garments brands.

“We do not believe Faremo’s claim that it lacks orders from its customers and so has to shutdown. We suspect that Faremo will reopen using workers who are contractual and without a labor union,” averred Jessel Autida, president of the workers union at Faremo.

Dennis Sequena, organizer for Partido Manggagawa which is assisting the Faremo workers, said that “Faremo’s closure is tainted with bad faith. A few weeks ago, a truckload of machines were taken out of the factory. Then the list of union members including their pictures were sent to other garments factories within the Cavite EPZA in a blatant blacklisting scheme to deny unionists alternate jobs. Finally management bypassed the union and talked directly to workers to cajole them into resigning.”

The union at Faremo was formed last year in a bid by workers to improve pay, benefits and working conditions and stop mistreatment like verbal abuse. Workers at Faremo, despite years of seniority, receive just the mandated minimum wage of P356.50, well below the daily cost of living which PM estimates at P1,100 per day. Pioneers at Faremo, who have worked since the factory started, receive just P1 higher than the rest of the workers.

He added that “While Hansoll wallows in profits, Faremo declared multimillion losses from 2011 to 2013 without ever shutting down. But just months after a collective bargaining agreement with the union was concluded, it suddenly closes.”

“When Faremo first broached that they may shutdown temporarily and layoff workers, the union responded by proposing that work be rotated so that workers need not be retrenched. But such doable measures from the union fell on management’s deaf ears. It replied with a hardline position—close the factory and bust the union,” argued Autida.

Since last week, workers have held daily protests like noise barrages during break time and pickets outside the factory gate. PM has launched a campaign to support the Faremo workers.