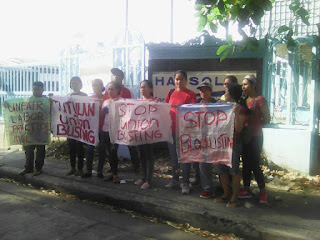 The closure of the biggest garments factory at the Cavite export processing zone (EPZA) is motivated by management’s desire to bust the union and replace regular employees with contractual workers according to its labor union. Faremo International Inc., located at the Cavite export processing zone in Rosario town, closed and laid off some 1,000 workers, mostly women.

“Faremo is shutting down to get rid of the union but will open again but with endo workers. This is not the first and last time that this union busting scheme was done by companies at the Cavite EPZA,” asserted Jessel Autida, president of the Faremo International Workers Association.

Autida cited the recent case of Seung Yuen Technology Industries Corp. (SYTIC) which filed a notice of closure last April to force workers who had formed a union to accept separation pay but which is presently still in operation with agency employees. SYTIC is a Korean-owned plastics company that supplies to eletronics factories. [See DOLE-NCMB record at http://co.ncmb.ph/ncmb-region-iv-a-settles-dispute-at-seung-yeun-technology-industries-corp/?print=pdf]

Autida clarified that Faremo workers are not on strike and want to work but have been locked out. He explained that they are maintaining a 24/7 picket at the factory to protest the illegal closure and union busting, and to guard against machines being taken out of Faremo. According to Autida, the union at Faremo was formed last year in a bid by workers to improve pay, benefits and working conditions and stop mistreatment like verbal abuse.

“Faremo has not presented any evidence to back its allegation that it lacks orders from its customers and so has to shutdown. It is just feigning lack of customers and financial losses. Thus we suspect that Faremo will reopen using workers who are contractual and without a union,” averred Autida.

He added that “Faremo declared multimillion losses from 2011 to 2013 without ever shutting down. But just months after a collective bargaining agreement with the union was concluded last May, it suddenly closes.”

“When Faremo first broached that they may shutdown temporarily and layoff workers, the union responded by proposing that work be rotated so that workers need not be retrenched. But such doable measures from the union fell on management’s deaf ears. It replied with a hardline position—close the factory and bust the union,” argued Autida.

The management of Faremo filed a notice for permanent closure in October 21. In response the labor union filed a union busting complaint. Faremo is a subsidiary of the Korean textile multinational company Hansoll and supplies to global garments brands.