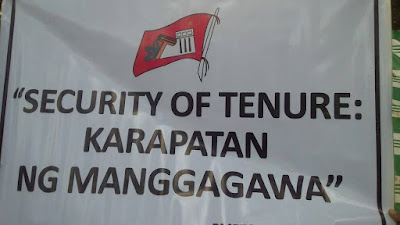 The labor group Partido Manggagawa (PM) expressed doubt on the announcement of the Department of Labor and Employment (DOLE) that 25,000 contractuals have been regularized. DOLE Secretary Silvestre Bello made the claim in a press conference in Malacanang.

“As much as we welcome thousands upon thousands of endo workers becoming regular employees, we are skeptical of DOLE’s claim because our own experience is that employers are extremely resistant to regularization,” declared Rene Magtubo, PM national chair.

Meanwhile PM, together with other groups like the Philippine Airlines union PALEA and the labor center SENTRO, today held a rally at the DOLE main office to push for an “end endo” formula of regulation and prohibition of subcontracting of regular jobs. The protest today is a buildup for the big nationwide mobilization by workers on November 30 to highlight the call to stop all forms of contractualization, including outsourcing.

Magtubo added that “We know for a fact that the DOLE has not been able to enforce regularization of workers in numerous instances. To cite a few examples. One is a Japanese-owned electronics factory in the Cavite ecozone that has refused to regularize hundreds of its agency workers despite an order from the DOLE. Second is the PALEA 600 who have not been reinstated by Philippine Airlines as regular workers despite a settlement agreement that provides for it. Finally the case of 149 Pizza Hut contractual workers who were retrenched when they sought regularization but have been reinstated only as agency workers.”

“The contagion of contractualization is spreading instead of being contained. In Toledo City in Cebu province, a large mining company is laying off workers who will then be hired as contractuals in agencies to do the same work. So we ask DOLE: Show us the 25,000 new regulars!,” Magtubo averred.

He quipped that “It seems that the news of 25,000 newly regularized workers is fake similar to posts in Mocha Uson's controversial blog,” he insisted.

Magtubo also slammed Bello’s endorsement of the employers’ “win-win” formula on contractualization. “The so-called win-win formula of the employers and now the DOLE will not end endo. The ‘win-win’ scheme is a scam that will lead to the utter proliferation of outsourcing and contracting out of regular jobs in the principal employers. The Labor Secretary is turning his back on the participants to the three Labor Summits convened by the DOLE in Luzon, Visayas and Mindanao who resolved to end all forms of contractualization,” insisted Magtubo.