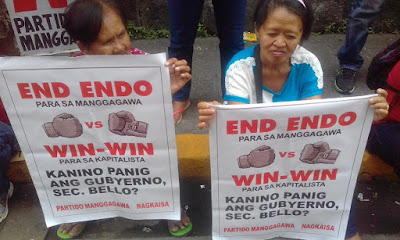 The nationwide rallies led by the labor coalition Nagkaisa were billed as a “National Day of Action Vs. Endo.” Partido Manggagawa (PM) together with other labor groups rejected the so-called “win-win” solution on contractualization and pushed for an “end endo” formula of prohibition of subcontracting of regular jobs.

“The misnamed win-win scheme proposed by employers, and promoted by the Trade and Labor Departments will not end endo. It is a scam that will lead to the utter proliferation of outsourcing and contracting out of regular jobs by the principal employers,” explained Rene Magtubo, PM national chair.

Member groups of Nagkaisa marched from Welcome Rotonda to Morayta where it held a program. Militant workers then joined other groups for another rally around noon at Mendiola to register labor’s condemnation of the surprise hero’s burial for Marcos. Labor organizations later participated in the broad protest at the People Power Monument called by the Coalition Against the Marcos Burial.

To express labor’s twin demands, PM highlighted the slogan “Ilibing ang kontraktwalisasyon hindi ang kasalanan ni Marcos.” Magtubo averred that “Students have already made their stand known. Today workers voiced out too their position on the burning issues of our country.”

“A hero’s burial for the late dictator is a stepping stone for the return to power of another Marcos. We can’t move on to a future where the occupant of Malacanang is an unrepentant member of a family that pillaged the public treasury and burdened generations with debt,” he added.

Magtubo argued that “President Duterte is accountable for this mockery of justice. He is in fact simply paying a debt, probably not of gratitude. Duterte’s newfound respect for the letter of the law in the case of Marcos’ burial contrasts with his utter disregard for due process and human rights for most everything else, including the execution of a bloody war on drugs.”