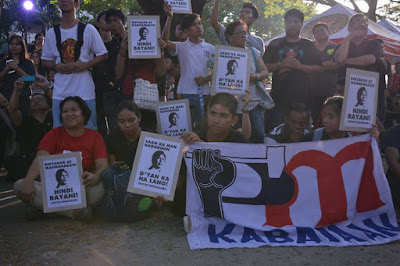 There was a secret deal to make this travesty happen. The Supreme Court decision simply rendered this political deal a legal character.
Today’s secret burial of the late dictator Ferdinand Marcos at the Libingan ng mga Bayani (LNMB) is a done deal.  It was a shared triumph resulting from a highly coordinated action between the Marcos family and the Duterte government.
We condemn this act as a mockery of justice and an affront to the principles civility.  Why bury a ‘hero’, their ‘honorable’ leader, sneakily away from national curiosity? Hence, it rather looks like a burial  for a high level terrorist rather than one with state honors.
The secret burial did not only deny the victims of martial law the chance to reverse the verdict against their tormentor.  It also reduced the peoples’ genuine quest for justice a trivial chasing game of chance under the present administration.
PM & iDefend to hold protest 5:00 pm today at Boy Scout Rotunda, Timog