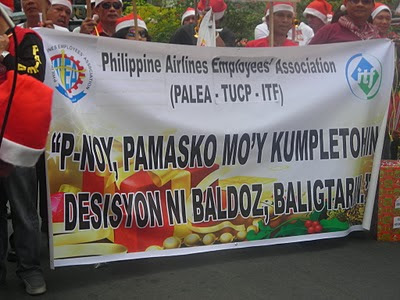 Some 200 members of the Philippine Airlines Employees’ Association (PALEA) and the anti-contractualization group Kontra went caroling in Mendiola at 10:00 this morning to wish for job security. “We call on PNoy to be a Santa not a Grinch. All we want for Christmas is our regular jobs. We ask PNoy to grant our wish that he reverse the decision of Labor Secretary Rosalinda Baldoz allowing the outsourcing and layoff plan by Philippine Airlines (PAL),” said Gerry Rivera, PALEA president and vice chair of the Partido ng Manggagawa (PM).

A PALEA member was dressed in Santa costume and chanted workers demands as he rang a noisy bell and shouted “Ho ho ho.” The group also brought makeshift Christmas gifts labeled with their demands for regular jobs and against contractualization. They also gave away to passers by lollipops together with PALEA’s appeal.

Meanwhile in a related development, PALEA announced that they are supporting the complaint of the PAL employee who was insulted by a party-list solon. “We stand by our fellow PALEA member in her case against the patent abuse by Rep. Eulogio Magsaysay of Alliance of Volunteer Educators,” Rivera insisted. PAL ground attendant Sarah Bonnin Ocampo had accused Rep. Magsaysay of calling her names when she was not able to accommodate his request for seat transfer.

Judy Ann Miranda, PM secretary-general, insisted that “Magsaysay had no right to verbally abuse and throw sexist remarks at anybody least of all a woman worker just doing her job. We demand that Magsaysay make a public apology.”

PALEA and Kontra announced that next year they will step up the campaign for job security and against labor contractualization. “A happy new year for the workers would mean the scrapping of the mass layoff at PAL and the regulation of contractualization schemes in all workplaces,” argued Rivera.

The two groups revealed that they will be combining mass actions in the parliament of the streets and lobbying in Congress to urge the enactment of the security of tenure proposal. “Workers must prepare for bigger battles, more actions and broader unity next year in order to win the demand for regular jobs,” insisted Rivera.
Posted by Juan Manggagawa at 8:54:00 AM