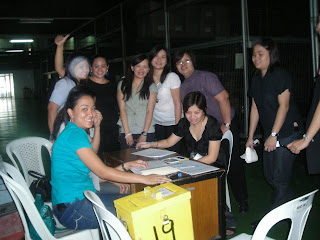 The Philippine Airline Employees’ Association (PALEA) released the final results of the strike vote yesterday afternoon after the union’s comelec finished canvassing the ballots. Some 86% of the total votes cast were in favor of a strike and a substantial majority of the total PALEA membership of 2,600 participated in the strike vote.

“Today is International Human Rights Day and the resounding vote for a strike is a democratic expression of PAL employees’ resolve to fight for their job security. Labor rights are after all human rights. The 86% vote is overwhelmingly given the fact that we had just 24 hours to inform members of thee holding of the strike ballot,” stated Gerry Rivera, PALEA president and Partido ng Manggagawa vice chair.

Rivera explained that the successful strike vote conducted among its members brings the union closer to holding an actual strike. According to the Labor Code, before any legal strike can proceed a notice of strike must be filed and then a strike vote conducted in which a simple majority of members must agree. He added that all that remains now is for PALEA to file the results of the strike vote at the National Conciliation and Mediation Board (NCMB), which has jurisdiction of the dispute, and then wait for the lapse of the mandated seven-day notification or cooling off period.

“We understand that a strike at Philippine Airlines (PAL) may inconvenience the public. But we also believe that the vast majority of the public are workers and their families who will benefit from PALEA’s fight for job security and labor rights,” Rivera insisted.

The strike vote was announced to PALEA members last Monday just after a notice was filed at the NCMB. The actual strike vote was conducted the whole day of December 7. The union’s comelec then waited for all the ballot boxes to arrive from the provincial airports before it tabulated the results in PALEA’s office in Paranaque yesterday.

Meanwhile PALEA answered the arguments of the PAL management that the strike vote is illegal since there is no labor dispute pending. “The strike vote stems from the labor dispute docketed as NCMB-NCR NS-11-128-10. That dispute has not been resolved nor been assumed,” Rivera asserted.

He reiterated the clarification that the issue pending at the Office of the President is PAL’s outsourcing plan which has been affirmed by Labor Secretary Rosalinda Baldoz while the strike vote arose from a separate though related complaint of individual bargaining by PAL management which constitutes unfair labor practice and union busting.

Further PALEA welcomed the consolidated security of tenure bill that was approved by the House Labor Committee at a hearing last Wednesday. “There will be many more PALEAs if capitalists are allowed to use the loopholes of the law on subcontracting to bust unions, cheapen wages, worsen working conditions and demolish workers rights,” Rivera ended.
Posted by Juan Manggagawa at 11:35:00 AM