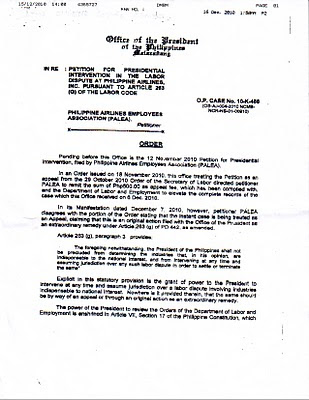 “PAL employees will have a merry Christmas since no retrenchment will happen this holiday season. Although it is not yet sure if we will have a happy new year because the suspension of the ruling of Baldoz is only temporary,” stated Gerry Rivera, PALEA president and Partido ng Manggagawa vice chair.

The assumption order from President Aquino arose from a petition for presidential intervention filed by PALEA. “Even as we thank PNoy for the order suspending the mass layoff, this initial victory is possible only because of the militance of PAL employees and the unity of labor groups,” Rivera added.

PALEA filed a petition with the Office of the President (OP) last November 12 but the formal assumption order took more than a month and only after a big labor unity rally at Ayala, Makati last November 25 and the overwhelmingly vote to strike by PAL workers last week.

Rivera insisted that “PALEA calls on its members and its supporters from the labor movement to remain vigilant. We have won a battle but we have not yet won the war. For more than a year already we have stopped PAL from implementing its planned outsourcing. But next year we will wage the mother of all battles to finally defeat PAL’s contractualization scheme.”

Rivera explained that while the planned strike by PALEA has also been stopped by the assumption order from the OP, the legal requirements have been complied with and so it remains an option for the union should the labor dispute remain unresolved.

Meanwhile, Renato Magtubo, PM national chair, also called on President Aquino to certify as urgent legislation the consolidated security of tenure bill that had passed first reading at the House of Representatives. “The precedent has been set that the OP will assume jurisdiction over labor rows and so PNoy now faces the possibility of dozens of unions asking for presidential intervention if no strategic solution to contractualization is forged. The security of tenure bill is a remedial measure, although not a lasting solution, that can curb the wanton proliferation of contractualization schemes and scams by capitalists,” he asserted. PM and PALEA are both pushing for the passage of the security of tenure bill.
Posted by Juan Manggagawa at 9:43:00 AM

Hi, i just want to say hello to the community